Neither V, U, or W. This is what the recovery will look like

Home » Strategy » Neither V, U, or W. This is what the recovery will look like

In recent weeks, economists and analysts of all persuasions have been arguing about the nature of the recovery: V, U, W, L, all the letters have been used. Yet none of them seems to reflect my understanding of this crisis. In this article, I present my recovery scenario and explain why it is useless to hope for a rapid return to normal.

Recovery V is a distant memory

I still remember my banker telling me at the beginning of April about the V recovery. This carefree attitude seems far away and makes me smile.

In BNP Paribas Fortis’ Eco Perspective rating of April 5, 2020, the optimism is still there: “According to an initial assessment by the OECD, the impact on eurozone countries, although temporary in principle, will nevertheless be very marked.”

At the beginning of the crisis, the Conference Board was not looking beyond October 2020 for recovery. Their most optimistic scenario (May Reboot) even predicted a comeback as early as May 2020 (in “V,” of course).

We all know that recovery V is now totally impossible. This scenario is, for example, totally ruled out in the United Kingdom. While confident about the recovery, the Governor of the Bank of Canada has also ruled out a quick rebound.

Of course, some people have shown moderate optimism, and these have produced analyses that I am in favour of today. Stephen Harris‘ analysis of April 8, 2020, was measured and contrasted with the opinion that Jérôme Powell issued 5 weeks later. In his press briefing on May 17, 2020, Jérôme Powell stated:

Assuming there is no second wave of the coronavirus, I believe you will see the economy recover steadily in the second half of this year.

I think Jerome Powell is seriously mistaken, and I’ll do my best to explain why.

The nature of the crisis was certainly different in 2008. But that is not the problem. The engine of growth is consumption and in particular the consumption of the United States, whose currency, a haven since the Bretton Woods agreements, allows them to finance their delirious appetite for consumption by increasing their external deficit.

For there to be a recovery, whatever the nature of the crisis, the American consumer must, therefore, recover in a credit-consumption cycle.

In a period of uncertainty, such as the one we are going through, human judgment is based essentially on primitive emotional mechanisms.

We are no longer capable of making rational decisions.

An economic recovery, therefore, presupposes that consumers (especially Americans) will start to consume again. And to do so, they must regain confidence in the future, since consumption is done on credit. But confidence is very subjective. In a period of uncertainty, such as the one we are going through, human judgment is essentially based on primitive emotional mechanisms. Conscious analysis, whose seat is the cerebrum, is eradicated. We no longer think with our primitive brain (the cerebellum), which controls our survival instincts through our emotions.

For a recovery to be successful, therefore, the emotional climate must be conducive. To do this, you need to stabilise yourself, that is to say, to find a rhythm that is known and that allows you to find your bearings again. 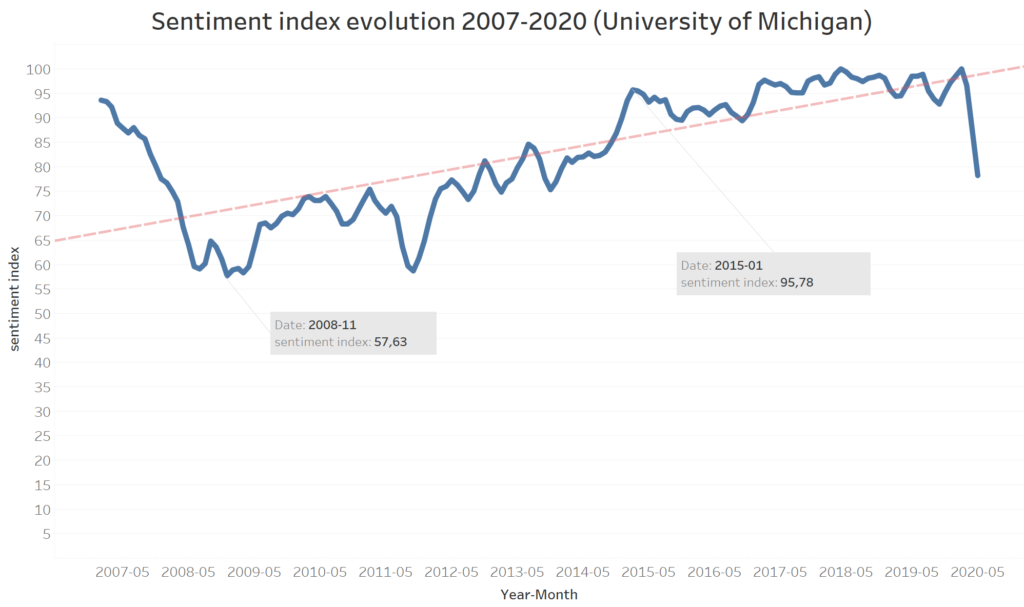 The collapse of confidence after the 2008 crisis was also brutal, and it took 74 months to return to pre-crisis levels (low point in December 2008 and first rebound in February 2015). This is why it is illusory to hope to reach post-crisis levels quickly. We are in a classic cycle of destruction – creation, but this time there is something different.

The different nature of previous crises

While the cycle of destruction-creation is not unusual, what we are experiencing today is new for our time. Since the Great Depression of 1929, the crises we have experienced have been entirely within the control of Man. He was at the origin of evil but was also able to find a solution. The best example is the subprime crisis in 2008, a reflection of human greed. Except that today, if once again human stupidity is at the root of the disaster, the solution escapes us completely. The breakdown of confidence in the future could be more significant than in any episode we have experienced so far. In an article published at the very beginning of the crisis, I wondered about the changes in behaviour that could be expected. Jerome Powell also wondered a few weeks apart. In his latest press conference, he said:

“Until [consumers] are confident that the virus is under control, they are likely to be reluctant to engage in certain types of activities.”

I have never been more convinced that significant behavioural changes will be visible in the coming years. It’s a groundswell that will lead to a retreat into the family cocoon. The digitalisation of interactions will become the rule, as will remote working and the reduction of office space. The consequences on innovation will be terrible because it is illusory to want to innovate from a distance.

These bleak prospects lead me to outline a 4-step recovery scenario.

We are entering an era of mass extinction: those of non-learning companies rigid and without digital skills.

My recovery scenario as an entrepreneur

I’m not going to beat around the bush. 90% of the scenarios I’ve heard seem utterly crazy to me. There will be no V, U or W. I haven’t found a letter to describe it, but failing that, I’ve drawn it for you. And to make things even more complicated, I even added a timeline.

I am aware that my predictions are not the most optimistic. Perhaps I wrote them down to forestall them. But deep down, I can’t help thinking that the world of tomorrow will not be the same from a business point of view. I plead for the versatility of individuals, for continuous learning, and I am increasingly convinced that we are entering a mass extinction: those of non-learning, rigid companies without digital skills.