The words used by customer service during an interaction are essential. Research of 1000 customer-employee exchanges shows that concrete terms positively impact (9%) customer satisfaction and the desire to buy. This indicates that the drivers of customer satisfaction are subtle. When the economy is reopening after the Covid crisis, employee training is more relevant than ever. Talking to customers cannot be improvised, and semantic aspects can have an unsuspected influence.

In this age of digitalization, remote customer service interactions have perhaps never been more critical. Whether on the phone or by email, this type of interaction is inevitably required. One wrong word, one misunderstood turn of phrase, and the damage can be immediate.

Words have the power to change the face of a conversation dramatically and calm the disgruntled customer… or the opposite. Understanding the influence of words on customer satisfaction is, therefore, more essential than ever.

Know how to listen and be concrete in the interaction

Generally speaking, customer service is a component of the customer experience. More specifically, the quality of the interaction has long been part of customer service management models. In its initial version, the SERVQUAL framework included a specific dimension related to staff courtesy. In its final version, one of the 5 dimensions of SERVQUAL is empathy.

In my work on customer complaint management, I showed that the concept of faces applied. It was a “linguistic” reading of the customer-employee interaction. The choice of words was decisive because the customer’s perception was affected, even in writing. In another scientific article, I had demonstrated a few years ago that grammar and spelling influenced the perceived professionalism and credibility of the employee.

The Research by Packard and Berger (2021) explores the direct role of semantics on customer satisfaction. In particular, they show that speaking “concrete” language to the consumer influences his satisfaction and purchase intentions.

In their Research, Grant Packard and Jonah Berger realized using 5 separate analyses based on actual interactions between customers and employees.

Each analysis provided additional insight into how the use of concrete words influenced customer satisfaction.

Below are real insights from 3 of the 5 analyses.

In the second analysis, we studied written interactions. Correlations with purchases realized using a 90-day period following the exchange were sought. The results show that when the concreteness of the response increases by one standard deviation, purchases increased by 13%.
While these results are, of course, not generalizable, they do demonstrate the value of the method. 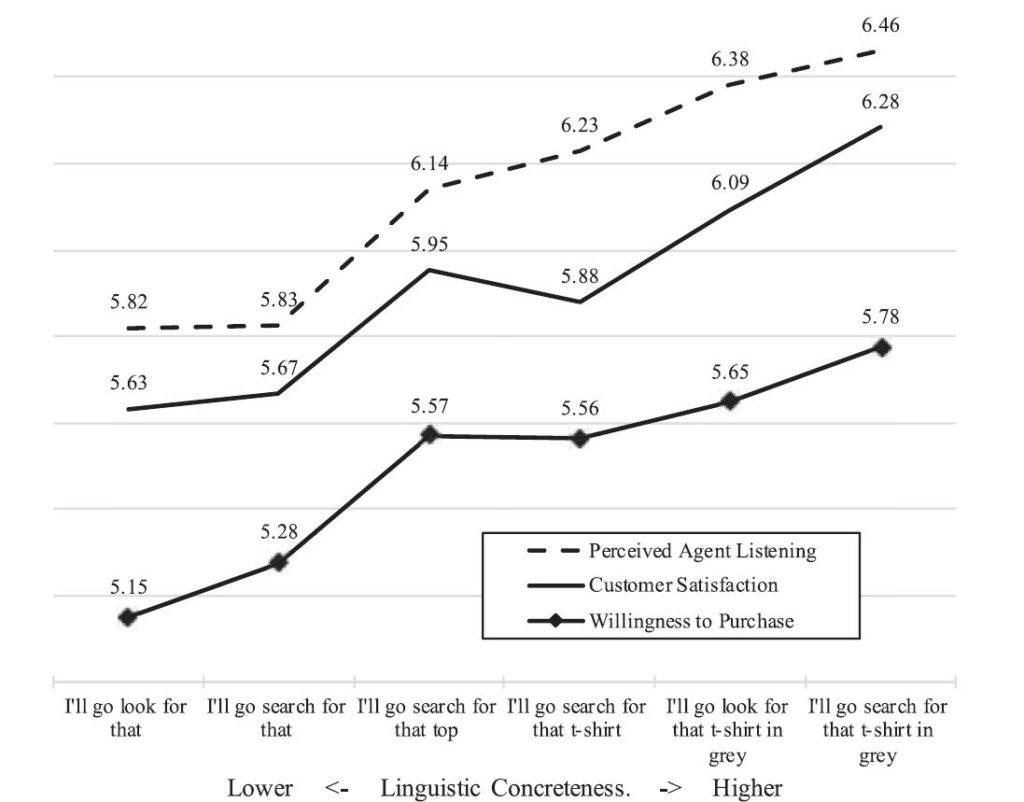