In the industry session on day 1 of the RecSys 2019 conference in Copengahen, Sandhya Sachidanandan presented her joint work with Richard Luong and Emil Joergensen on recommending products online at IKEA.
The idea of the work was to extract product associations using Convolutional Neural Networks (CNN), and use these associations  to suggest relevant product recommendations. In other words, a picture served as basis to run a CNN, and detect objects that appeared together. Since the pictures used had been produced by IKEA stylists, one could logically assume that the objects appearing together on the picture would also “fit” together from a style viewpoint; hence, they could be recommended

3 methods were tested by the authors and compared : 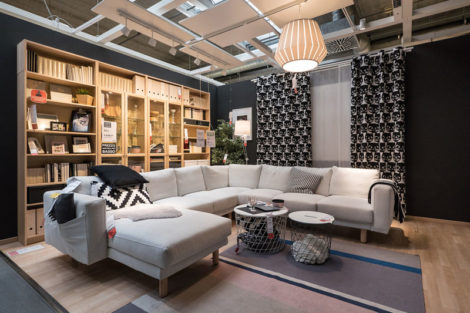 The idea which I found interesting is that the product associations were extracted using “styles”, i.e. pictures that had been produced by IKEA stylists on basis of human perceptions of what a stylish interior may look like. The recommendations were consequently based on human associations. In other words the recommendation algorithms was fed with a human touch, which I find a particularly good idea that resembles the recent announcement by HBO of the “recommended by human” tool.

Obviously all products featured on those pictures were made by IKEA. I wondered then why it was necessary to use a -rather- complex algorithmic approach to detect IKEA objects on a picture produced by IKEA. Wouldn’t it have been sufficient to list the ID’s of products on a picture and then use business rules to recommend one or the other?

A business idea for IKEA (I give it for free)

For me that approach will start making sense when pictures not produced by IKEA will be analyzed and IKEA equivalent will be proposed.
Imagine the following scenario: you’re browsing pinterest and find an amazing picture of an interior style. You have no idea where to find the different pieces of furniture needed to assemble the same style. You upload the picture on the IKEA website (after creating an account of course), the image is analyzed and nearest equivalents in the IKEA product catalog are found and recommended.
On the way IKEA may even learn quite a bit. Imagine a certain image or a certain style are recurrently uploaded and no good equivalent products are found, it may prompt IKEA to develop the missing products.

How cool is that idea ? (it probably already exists, but anyway …)