Fundraising in Europe: only 8.1% women!

In our latest research on the fundraising of European companies in 2020-2021, we highlighted the total under-representation of women. They represent barely 8% of the founders of these companies. Today’s research goes deeper into the subject to understand which countries women are best represented and which ones have raised the most money for their start-up / scale-up in 2020-2021.

8.1% of women in companies that have raised funds

The first thing to do is visualize what women represent among the founders of the companies in our research. Of the 1374 founders in the 841 companies in this research, only 111 were women. This means a mere 8.08%. 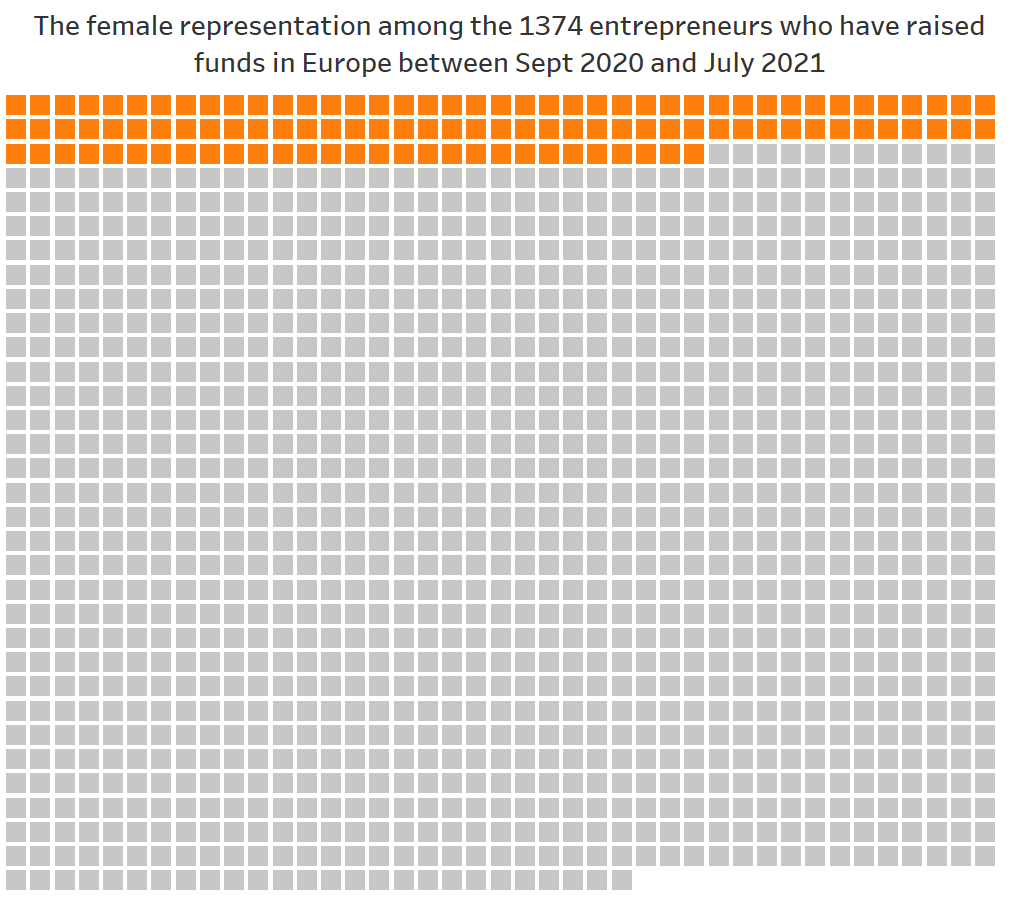 Companies (co)founded by women represented 7.96% of the amounts raised

In the American research published in the Harvard Business Review, women received only 2.3% VC funding. Our research focused on Europe establishes the share of the financing at 7.96%.

This figure is close to the representation of women in the companies we studied. This tends to show that there is no discrimination in terms of the amounts granted. 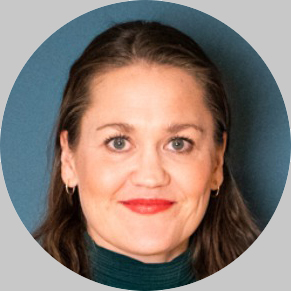 “I almost felt like it was to our advantage that I was a woman.”

Bibi Blomqvist is the co-founder of Cogo, a mobility start-up. She is based in Copenhagen and raised €1m in March 2021.

What surprised you most about the results?

The gender gap in fundraising. Although this topic has received extreme attention in recent years, I was still surprised that the gap was so large.

How do you personally perceive these results?

As a tech entrepreneur myself, I noticed that this “tech” component was present in many women raising money. So, I’m wondering if the results aren’t a reflection of the underrepresentation of women in tech.

Did you get the impression that investors were more reluctant to lend money to women than to men?

We are a mixed team of co-founders. With all the focus on diversity, I almost felt like it was to our advantage that I was a woman.

Finally, we note the excellent position of Denmark, which is on the 5th step of the countries where women are best represented, even though it is only 13th in terms of amounts raised. This performance reflects the high proportion of women entrepreneurs in this country, as you can see in the following graph. 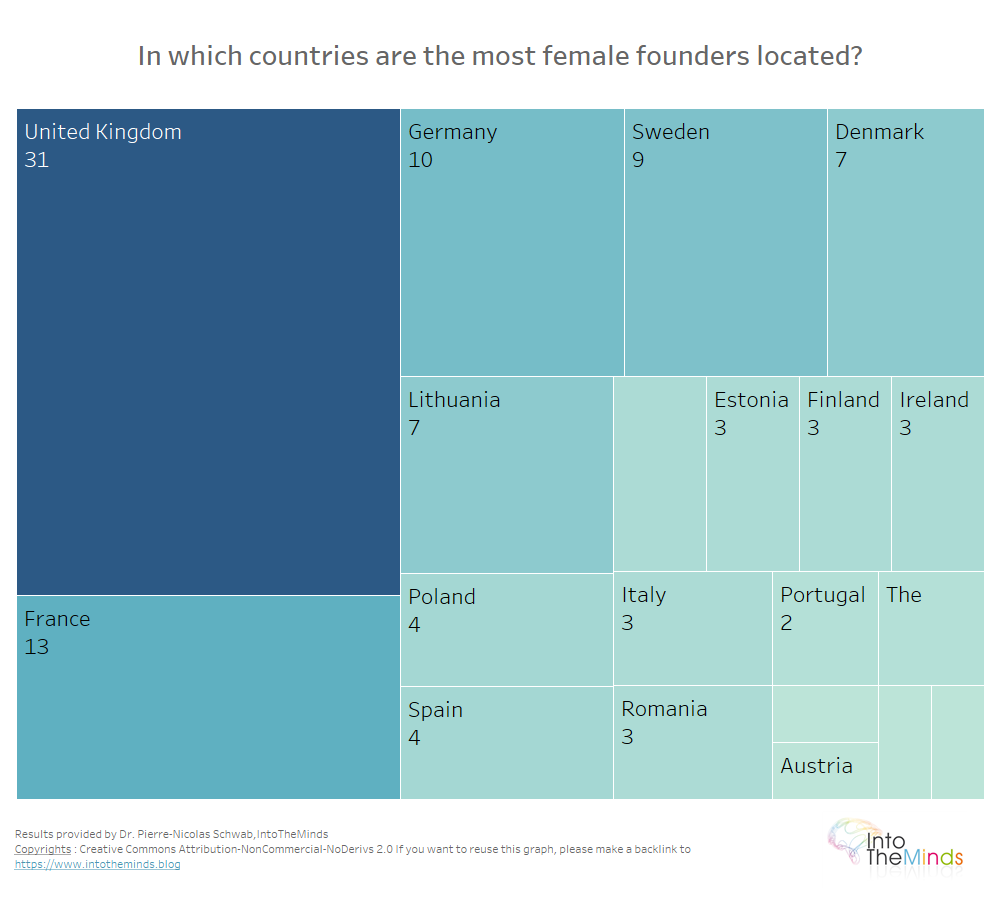 Which countries have the highest proportion of women founders? To answer this question, we have mapped the proportion of women in each country. As you can see, the percentage varies significantly from one country to another. These vast differences are also a reflection of the minimal number of fundraisers in some countries. For example, Lithuania, which tops our ranking, has only seen 10 fundraisings involving 23 (co)founders (of which 7 are women) over the period.

The same is true for Romania, which is surprisingly second regarding the percentage of women (co)founders, but for which only 6 fundraising were observed during the period Sept 20 – July 21.

In the 3rd place, we find Denmark, where 15.2% of the entrepreneurs in our research are women. The number of fundraising events (23) is more significant. 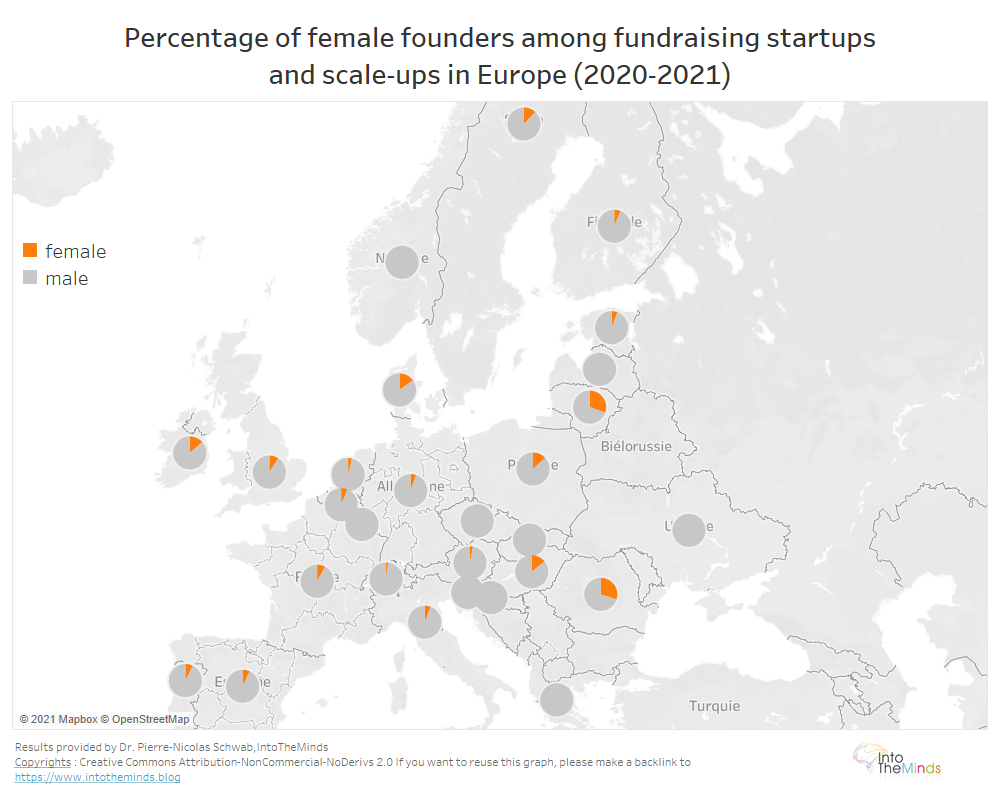 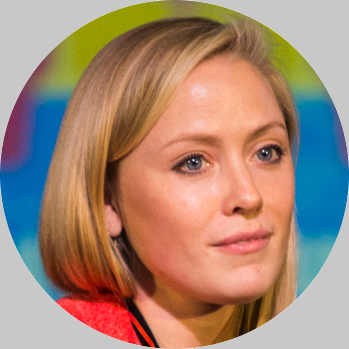 “When I saw the results, I wasn’t surprised.”

Mathilda Ström is an experienced entrepreneur. Co-founder of BIMA, she raised 26 million Euros in September 2020.

Originally from Sweden, she now lives in the UK. “When I saw the results, I was not surprised,” she told us in the introduction to our interview.

In discussing the results of this research with Mathilda, she raised several interesting thoughts:

BIMA is a fintech company in the healthcare domain. It provides insurance and digital health services in emerging markets. It was founded in 2010 by Gustaf Agartson and Mathilda and has raised about $200 million.

TOP3 women who have raised the most funds

The first lesson is that the most significant fundraising of start-ups co-founded by women is not in the UK. It’s in Sweden and Lithuania.

Two women are neck and neck in the ranking in terms of amounts raised. Kry (Sweden) raised €262m and Vinted (Lithuania) €250m. In the 3rd place, we find Infarm (Germany) with €144m.

Why so few women in European start-ups and scale-ups?

The results of this research are compelling. They are also in line with other research on female entrepreneurship and female representation in high-growth start-ups.

Weakness of female entrepreneurship in general

Women are generally less willing to take risks than men. This may be one factor that explains why they create fewer companies. An INSEE research shows that companies started by women in France represent a little more than a third (37%). It is, therefore, logical to see an imbalance in the number of companies receiving private financing.

In our sample, the proportion of women being significantly lower, we can also consider the hypothesis of a lower presence of women in high-growth start-ups. This could be explained by a higher aversion to risk, as shown in this other research.

In this article, a start-up founder tells anecdotes showing that investors have prejudices that affect their decisions.

This research looked at 841 fundraisings in 2020-2021 in Europe. It shows significant differences from those already realized in the United States. Although women are better represented than on the other side of the Atlantic, they are still a minority. Therefore, these results should be highlighted to raise awareness in the entrepreneurial sphere on the one hand and among public authorities on the other. 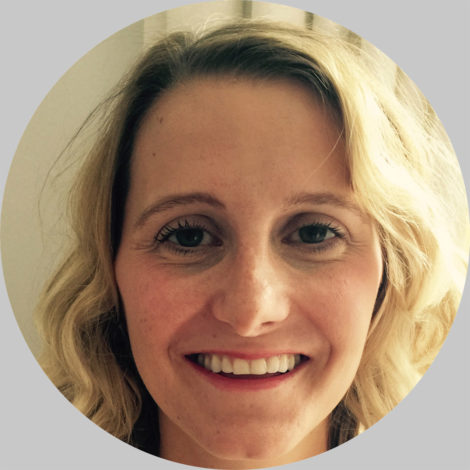 “I don’t recall attending a meeting with a single woman or minority representative.”

Zoë Vets is co-founder and CMO of Livetheworld.com. She raised €300k in April 2021. She is based in Antwerp, Belgium.

Why do you think these companies are mostly founded by men?

I think a lot of these companies have a technology component. The technology world is still largely male-dominated. This is also reflected in the founders of these companies. Getting financing through a business angel or venture capital requires a voluntary approach and some risk. From what I can see here in Belgium, female entrepreneurship is growing significantly. But the way women are getting investments is more traditional. They proceed either via conventional loans or via crowdlending, and their growth rate is slower.

Is being a woman a disadvantage when raising funds?

At the end of the day, we have to face the facts. In our case, all the ” business angels ” and venture capitalists were white men (mostly older). I don’t recall ever attending a meeting with a single woman or minority representative. People gravitate to those who come from the same background. It’s much easier to talk to someone from your school or the same socio-economic background.

On top of that, I think most (not all) women and men have a different approach to networking and promoting their start-ups. Men will go straight to them with confidence, even if the connection is weak. Women generally have a softer, more roundabout approach (which I do as well). Ultimately, suppose the investment community doesn’t become more diverse in Belgium (and other parts of Europe). In that case, even if we try to promote women and minority entrepreneurs, the number of investments will remain disappointing, I’m afraid.

What advice can you give to women creators of startups to raise funds?

Don’t be afraid to reach out to your network. People are more willing to help and connect you than you think. This is especially important in the early stages when you are looking for seed investment.