« Great » and « failure » may be two words you wouldn’t associate at first.  Yet, it’s the impression which I got whe I recently received the Starbucks newsletter proudly announcing that 150 ideas from the MyStarbucksIdea platform had been implemented. 150 ideas is a lot. Yet it is nothing compared to the 116100 ideas submitted (I summed them up on August, 12th). It’s actually a mere 0,129% of the grand total. 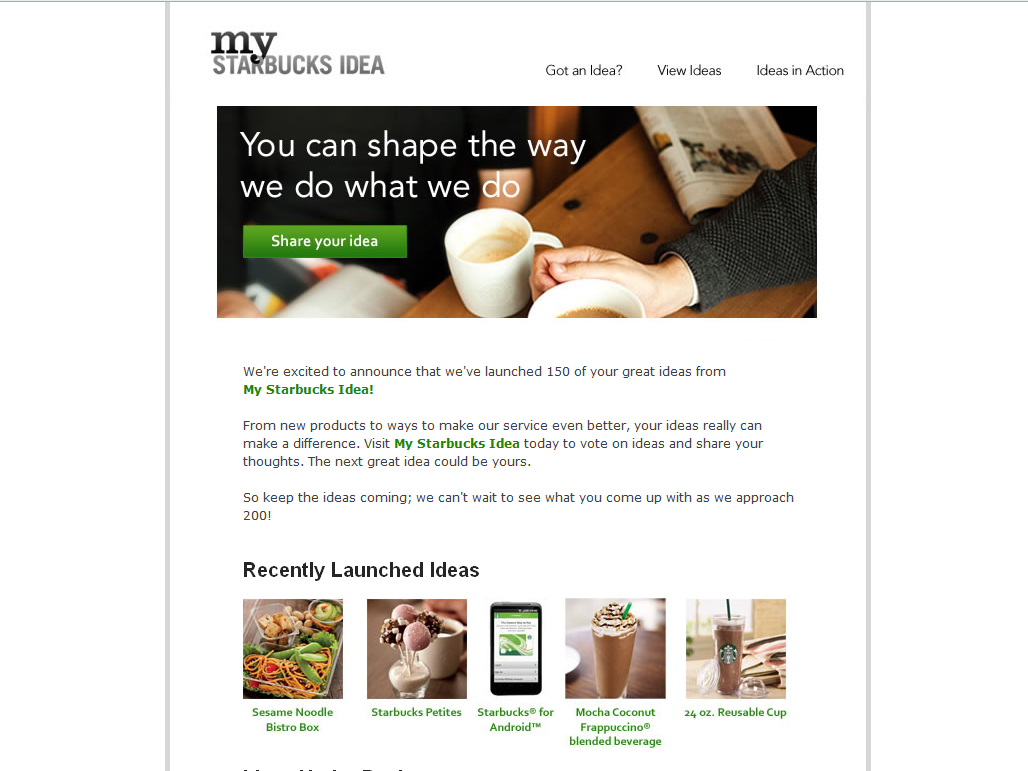 If those ideas were revolutionary it would be an excellent rate, an exceptional one actually. But what are we really talking about? What are those ideas which have been judged worthwhile enough to be put into practice. I quickly browsed the list of the latest “approved” ideas : enjoy a caramel wafer cookie with your coffee, a new veggie bistro box, mobile payment for Android, a new bottled zero calorie tea, …

It’s hard to evaluate the costs that were required to run MyStarbucksIdea but let’s try anyway.

I found an interview of Starbucks’ CEO on BusinessWeek (http://www.businessweek.com/magazine/content/08_17/b4081000030457.htm) in which he states that a team of 48 Idea Partners runs MyStarbucksIdea (the interview was performed shortly after the launch of MyStarbucksIdea in 2008). Let’s assume those 48 employees work 220 days / year: it makes 84480 hours per year. The platform was launched in 2008 and has thus ca. 3 years of existence which represents  253440 hours of work. The minimum wage in the US was 7,25$ in 2009 (taking as a basis for the calculation the minimum wage will clearly lead to an under-evaluation of the costs since he “Idea Partners” are white collars workers who certainly earn more than the minimum wage). 253440 hours of work at 7,25$ per hour represent a cost of 1,837,440$, which is 12449$ per idea.

Those 12449$ of course do not include the deployment costs of the ideas.

You may wonder whether spending 12449$ to follow up and approve each of the 150 ideas is really a bargain. After all you could employ a well qualified marketer for 2 months with that amount of money.

This is however not the point. MyStarbucksIdea remains a wonderful PR tool. It was with Dell’s IdeaStorm one of the first large-scale platform to interact with the customers. Starbucks was a pioneer just like Dell and that’s why they deserve respect. What does remain for the followers? Well, not much. Followers will hope to make a return on investment but they can’t calculate it. Actually how would they calculate it? Followers will see in the platform only the ideas generation part of it and will hope to be able to generate ideas that will help their business grow. They are wrong. The ideas you’ll get from the platform are not what you should be looking for. Those ideas will never be revolutionary and will never help you to launch the next blockbuster.

The real innovation was the platform itself, a new way to interact with the customers, not the ideas which are generated. This platform has existed now for more than 3 years. It’s not new anymore. It’s time to innovate again. Focus your efforts on finding something else to delight and surprise customers; don’t lose your time in copying your competitors or reinventing the wheel.