How to stimulate discovery with recommendation algorithms

Home » How to stimulate discovery with recommendation algorithms

The RecSys 2021 conference on recommendation algorithms has just ended. The hybrid mode did not simplify the interactions, but the exciting presentations followed one another and did not fail to give rise to new ideas here and there. This was the case for the keynote by Cynthia Liem (Delft University of Technology).

Cynthia has the particularity of combining two talents: she is a computer science researcher and an accomplished pianist. On this double competence, she built her keynote entitled “Key Notes from Keys and Notes: Pianist Perspectives on Recommendation” at the RecSys 2021 conference. I found it particularly interesting as it sheds light on the limitations of recommendation algorithms.

(Classical) music is a matter of interpretation

As a classical musician, Cynthia has put her finger on an obvious fact that we tend to forget: classical music is about interpretation since the original interpretation of the composer has not survived. It follows that each musician reinterprets the work of a composer “in his way.” In other words, the musician interprets the composer’s intentions according to their history, resulting in very different versions. I very much appreciated the way Cynthia illustrated this interpretive ability using the example of Gounod’s Ave Maria.

The result is an essential element of the way we consume online music content: multiple versions of the same song are available without us being able to differentiate them a priori. Recommendation algorithms are not helpful in this aspect for the moment.

Bach would have been eliminated if recommendation algorithms had existed in his time.

The duplication problem is evident on any listening platform, and it is not limited to classical music. Here is the result of a search on Spotify on a well-known jazz song, “Mack the Knife.”As you can see, it isn’t easy to choose, as there are so many versions. 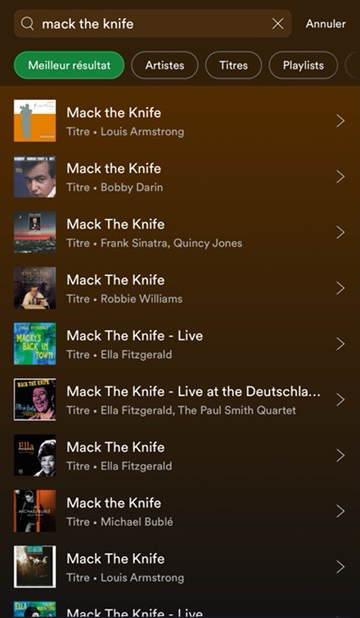 However, each piece is quite different. The recommendation algorithm is, therefore, of no help here.

The other cardinal idea developed by Cynthia concerns exposure to a new type of content. Just like certain foods that you only appreciate after having eaten them several times, you have to consume a new kind of content several times to find it to your liking. The flaw of recommendation algorithms is that they can hide a whole range of content after a first failed exposure.

Let’s not forget that the popularity of a piece of music is often later than the death of its author. Bach died in 1750, and it was not until much later that his music became popular. As Cynthia reminded us, “Bach would have been eliminated if recommendation algorithms had existed in his time. 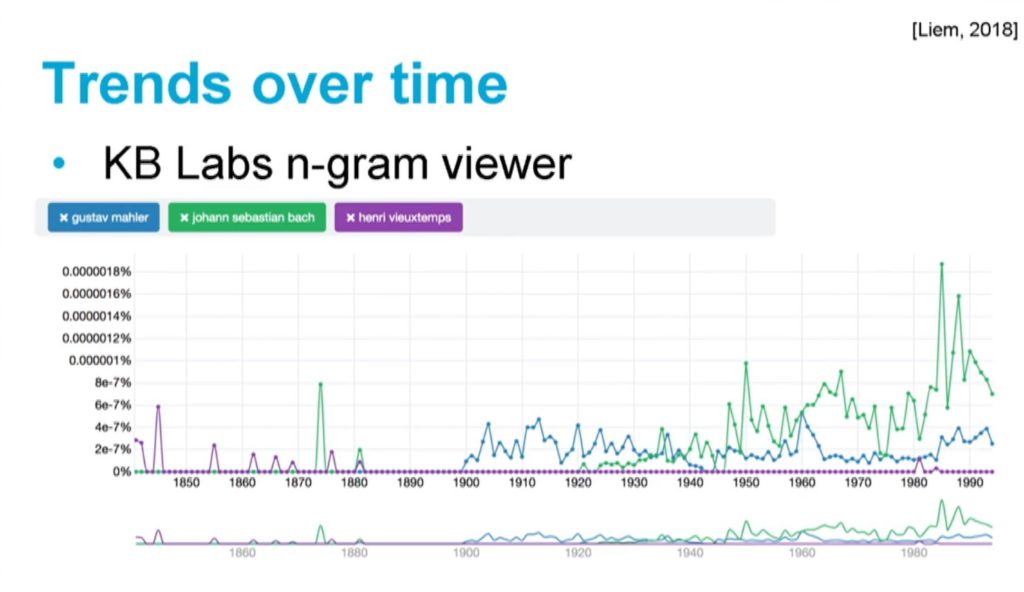 Cynthia’s experience with the Magma Duo is enriching in this regard. Using the example of Dutch composer Matthijs Vermeulen, Cynthia has shown that the more concerts a user attends, the less distance they have to their music. Therefore, a recommendation algorithm that favors diversity should include a feature that still exposes the user to content that they would not have liked.

In a library, the extent of available knowledge is visible and limited to the space of the place. With the advent of the internet, we have lost the notion of the “limits” of knowledge, and we can no longer visually identify the spaces yet to be discovered.

How to discover what you don’t know yet?

The question of exploring a domain is intimately linked to our perception of the extent of that domain. In other words, how do we discover what we don’t yet know exists? This problem is particularly pronounced in the field of music since an infinite variety of styles exist, and we always consume the same thing. Recommendation algorithms can be of great help here, as long as they are programmed in the right way.

The public library used to visually delimit the world of knowledge.

I find the discussion about the limits of knowledge absolutely fascinating. Cynthia gave a very telling illustration: the library. For those of us who lived in the pre-internet era, the public library visually delineates the world of knowledge. The internet has erased this physical perception of expertise, so much so that Millennials no longer understand the very idea of ordering data. This article published in The Verge shows that young people are strangers to the concept of classification on a computer. As a result, files are stored in a chaotic fashion, which significantly hinders discovery and innovation. 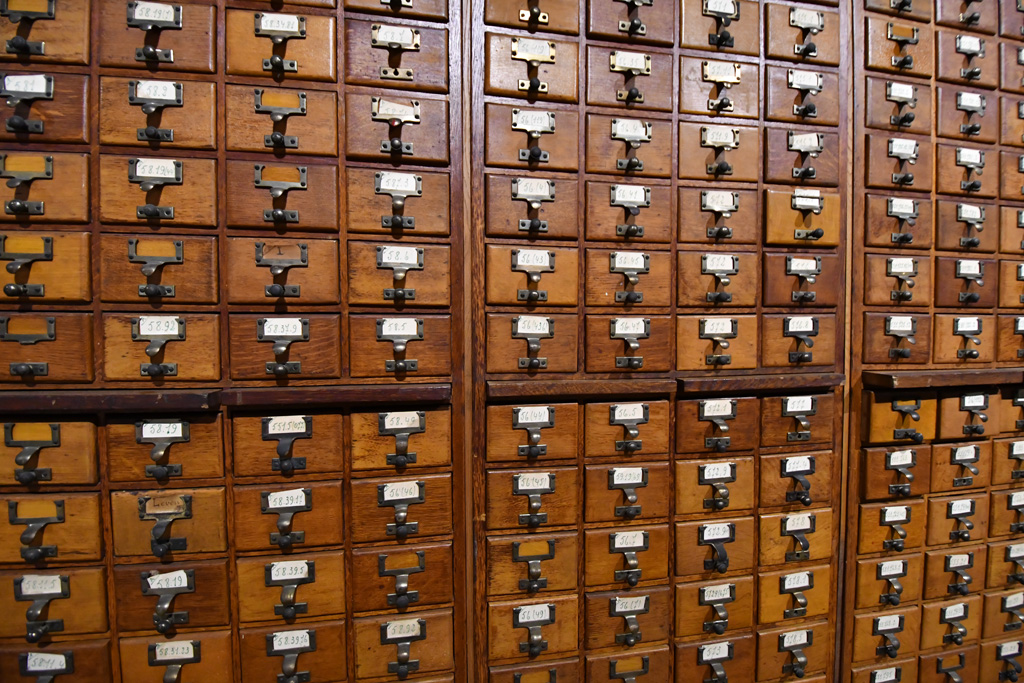 The Mundaneum had the ambition to catalog all the knowledge of the world. The 12 million didactic cards, today exposed in Mons (Belgium), are classified in drawers. This notion of “tidying up” has tended to disappear since the advent of the web.

Without digressing too much, I would like to remind you that the structuring of knowledge is one of the cornerstones of the human being’s capacity for creation. Darwin would not have developed his theory of evolution without organizing his understanding in a commonplace book. The sociologist Lühmann would not have written 70 books and 500 articles without his Zettelkasten system. In both cases, the “ordering” of information was the key to success.

This discussion about the limits of recommendation algorithms leads us to understand our role as humans better. I can’t repeat enough that algorithms are tools and that artificial intelligence can only be infused by human intelligence. Just like the artist whose work reflects his personality; the possibilities of the algorithm are defined by its designer. I, therefore, believe that any algorithmic design must be based on clearly defined objectives. It follows that you must choose the metrics used very carefully to achieve these goals. But this is often where the problem lies. As the drawing below humorously illustrates, mistakes in the choice of metrics are common and can have disastrous consequences on the user experience. 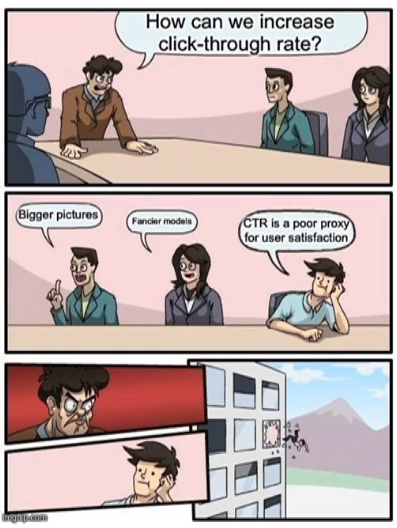