On LinkedIn, to create a Buzz, it is better to be a young woman…

Analysis of 1118 viral LinkedIn posts shows the domination of women in terms of reactions (likes and comments). Among these influencers, there is also apparent domination (nearly 50%) of women aged 18 to 30. This domination is exercised in terms of the number of profiles in this age group and the number of reactions collected. Although men are more numerous, they collect fewer reactions on average. Lenna Jouot dominates the ranking in the French-speaking world thanks to 6 publications that have gathered 118655 reactions.

This research is based on a dataset of 5 million posts already exploited in this analysis of the 3 virality factors on LinkedIn, the optimal number of hashtags, and emojis. About 1.08 million of these posts were in French and analyzed below.

We isolated a corpus of 1118 posts in French that received more than 500 reactions (likes and comments combined) and that were put online by users with less than 25,000 connections. These 1118 posts came from 809 different users and totaled 1781022 reactions.

Influence on LinkedIn: women are the most effective

The visualization below helps to understand the demographics of influencers on LinkedIn.

The male/female distribution is relatively consistent with the population of LinkedIn users as a whole. Researching the 809 profiles included in the dataset shows that 59.77% are male, and 40.23% are female. This is close to the distribution across the entire LinkedIn network: 56.6% men and 43.4% women. 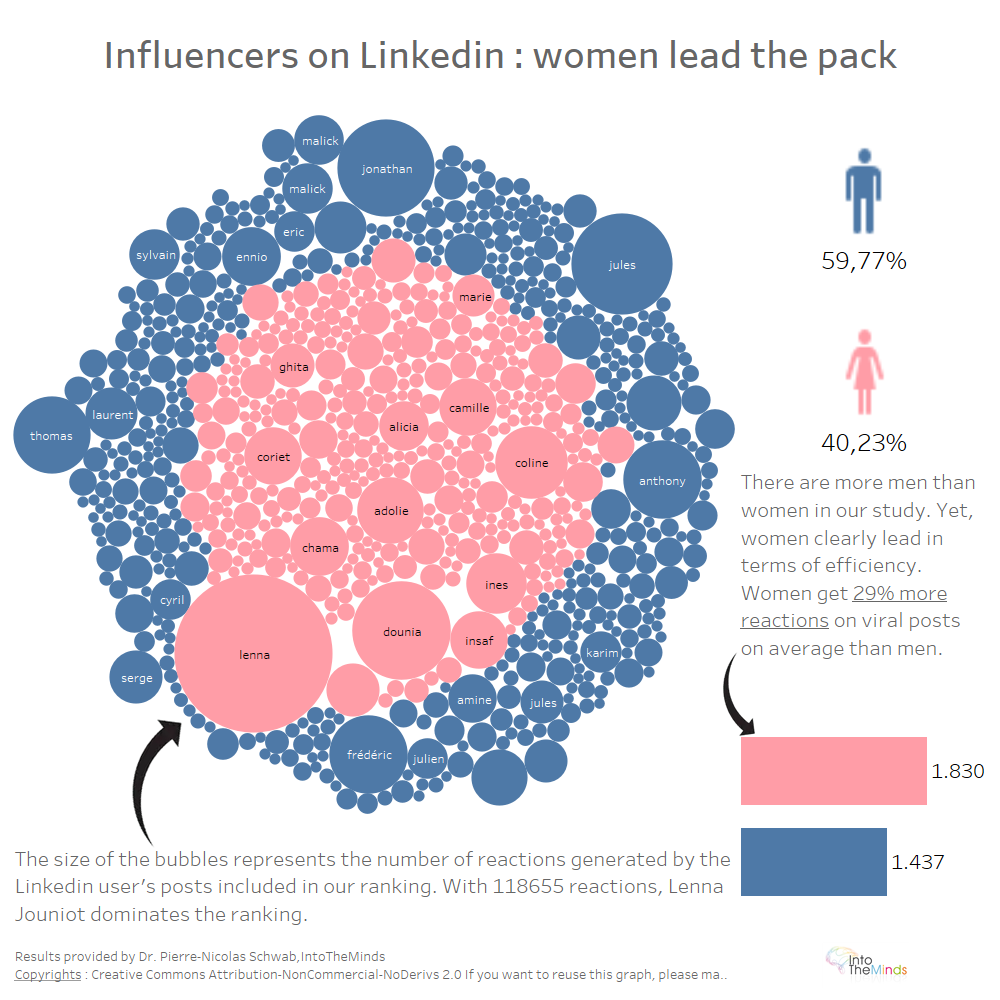 However, we can see that some profiles have accumulated many more reactions than others. Moreover, a woman (Lenna Jouot) dominated the ranking with 118655 reactions (likes and comments combined) over the whole period observed.

This female domination is also seen in the average number of reactions per post. Thus, women’s posts have collected 1827 reactions on average against 1439 for men within our dataset. This is a difference of almost 30%. This domination remains even if we exclude the posts of Lenna Jouniot.

Female influencers on LinkedIn: focus on the young

The assessment of the age of each LinkedIn profile contained in the dataset allows us to make a new reading of the female influence.

We can see on the graph below that more than half of the female influencers are under 30 years old. This statistic is unprecedented and contrasts strongly with the age distribution within the LinkedIn community. The statistics show that 20.3% of LinkedIn users are between 18 and 25 years old (source). Even though our range is slightly more extensive, we can see an age bias among the most influential women. 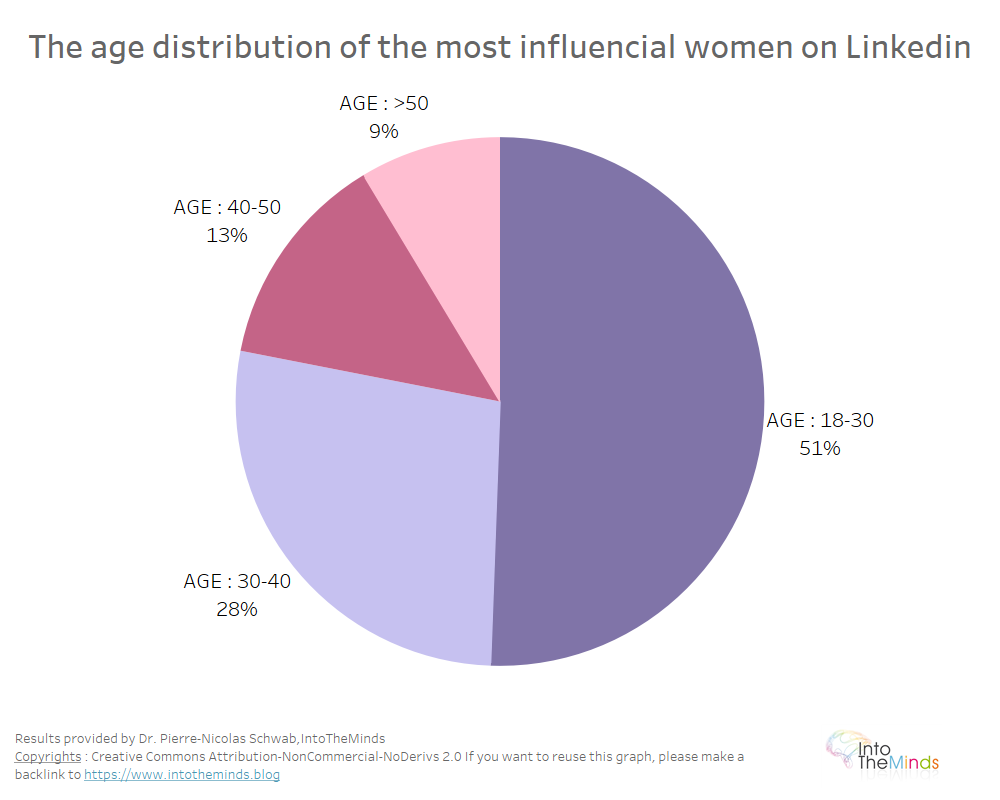 This research shows that making a string of viral posts on LinkedIn is a challenge. Of the 447 women in our ranking, only 15 have at least 3 posts with more than 500 reactions. As in the previous research, the 18-30 age group dominates. 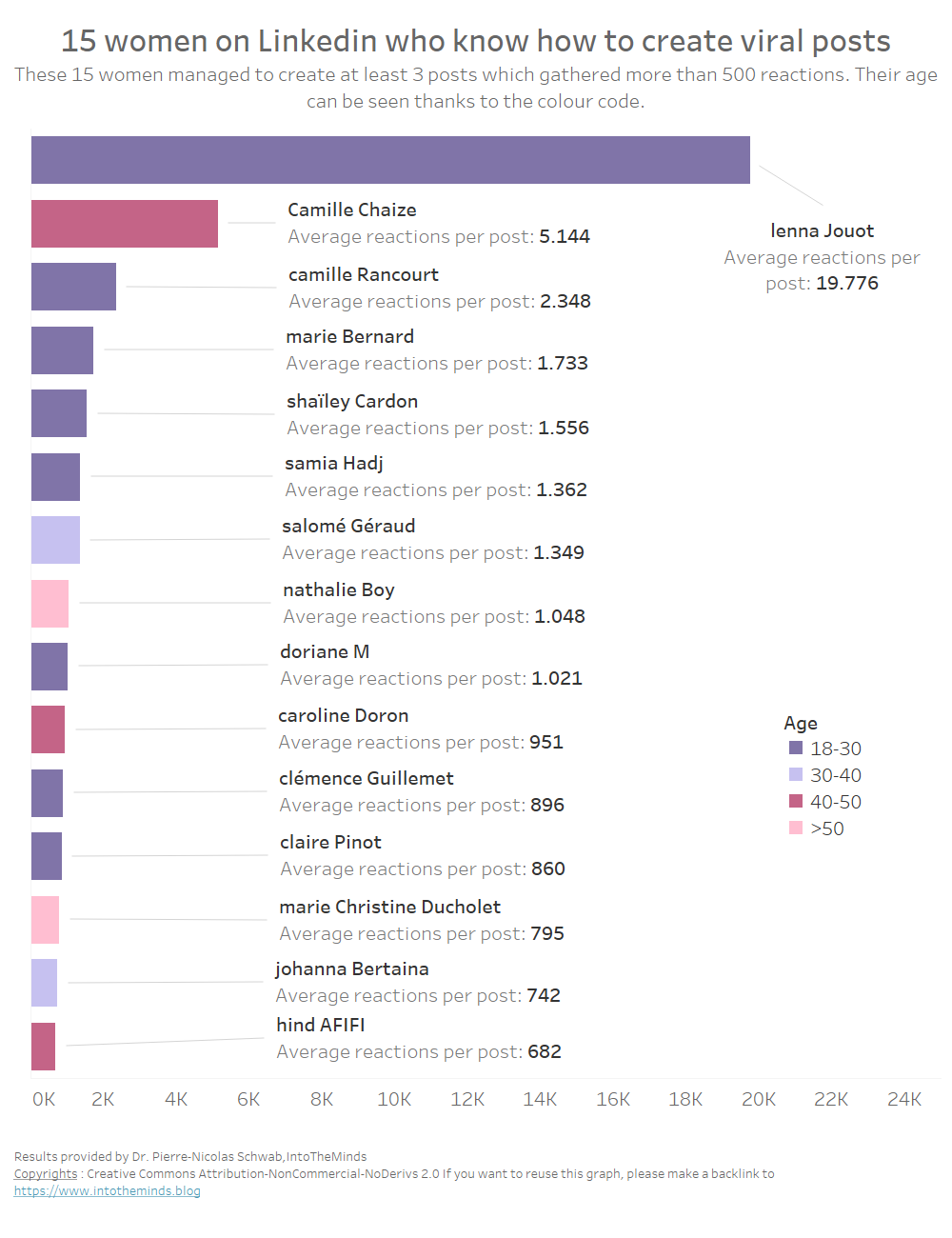 The 6 most regular influencers on LinkedIn

To make the buzz once is difficult but possible. Repeating the feat is a whole other challenge. There are only 6 who have exceeded the 500 reactions mark more than 5 times.

First of all, let’s remember that our analysis is limited to LinkedIn posts in French. Our dataset included a little more than a million posts from which we only retained those that had at least 500 reactions and whose authors had less than 25,000 connections.

This being said, here are the 6 influencers that stand out from our ranking: