Does the Covid crisis sound the awakening of consciences and the dawn of a new day in responsible consumption? In any case, I had the sensation of awakening after seeing the receipt of the online sales platform Omie, a ticket on which are displayed in all transparency the margin, the price paid to the producer, the cost of raw materials.

In this article, I first question the global context in which this platform operates. Then I analyze Omie’s business value proposition. And finally, I interviewed its founder, Christian Jorge.

The receipt provided by the OMIE platform transparently displays the remuneration of the various links in the distribution chain.

From fair trade to total transparency in the value chain

After observing the boom in consumption of organic products during the Covid crisis, today’s article looks at another facet of this behavior change: consumption reimbursing all the links in the value chain.

Behind what may seem like a struggle, the shadow of the large-scale distribution is, of course, visible. The accusations are not new. Mass retailing has long been accused of capturing the lion’s share of profits and “robbing” producers, significantly (and above all) farmers. Resistance has therefore been organized and has taken different forms. Historically, there was first the emergence of “fair trade,” which focused on the South’s countries. Initially confined to “militant” organizations in the 1960s, the “fair trade” logo is now found on giant food companies’ products. Proof, if needed, that this militant consumption has gone beyond its niche status.

More recently, there have been initiatives such as “C’est qui le patron ?” (Who’s the boss?) launched by Nicolas Chabanne. The latter has succeeded in imposing a militant brand in supermarkets that make fair pay the main component of its marketing.

But we must admit that the distribution of value remained taboo. At a time of economic espionage, who would expose to everyone what they earn?  But that’s what Omie, a new online sales platform, dares to do.

Omie: total transparency on prices… right down to the receipt 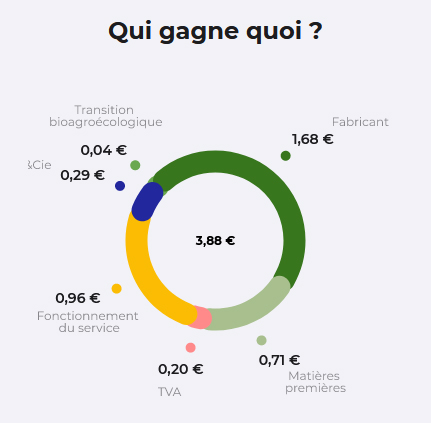 The distribution of earnings for one of the products (chocolate cookies) sold on the Omie platform.

I must admit I was astonished when I saw Omie’s receipt. It details how each actor in the supply chain gets paid to the penny:

The transparency that can be found on the page of the products themselves as shown in the illustration opposite.

There is even a part reserved for the “ecological transition,” which corresponds to a voluntary contribution made by Omie.

Proof that this form of price activism is not inappropriate, I found another example in a Breton supermarket (see photo below). For one of the products sold in the fish section (mussels, to be precise), the part paid to the producer is clearly displayed. Granted, it’s less visible than at Omie, but we must still applaud the effort. 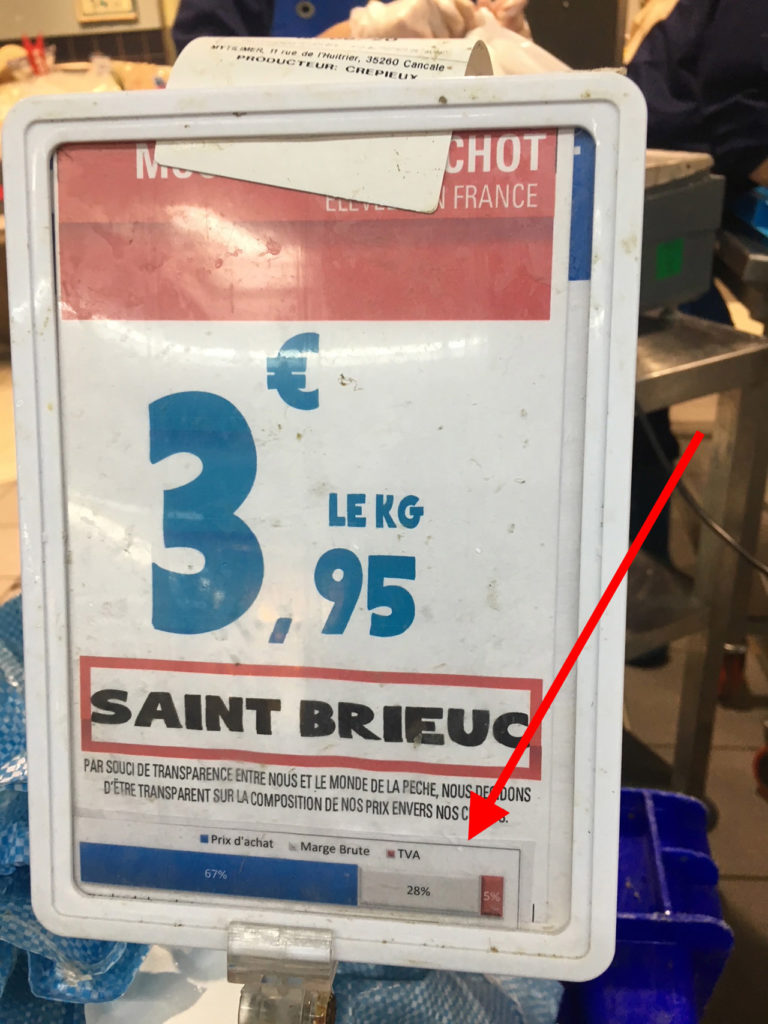 Omie: a marketplace with an original positioning

Omie was launched by a veteran entrepreneur: Christian Jorge. He was the co-founder of Vestiaire Collective (which we talked about here and there), and Omie is his latest project.

Omie’s positioning is original since it is based on the one hand on price transparency and the other hand on what we could call “marketing sobriety.” The products are simple, the packaging too. We feel that there is a will to put forward the products the least transformed possible and to promote a specific form of “food sobriety.”

Who are the customers of these “niche” products?

This is, of course, the big question. Omie has values that speak to many consumers but are still niche values when it comes to purchasing. No one can reasonably claim to be against the ecological transition, reducing packaging, or the producers’ fair remuneration. But “living” these values requires an effort that is not available to everyone. It’s a bit like organic food. Everyone is for it, but it took more than a decade for organic consumption to take off (see our research on the organic market here).

To deepen Omie’s ambitions, we asked its founder Christian Jorge, whose interview you will find below. 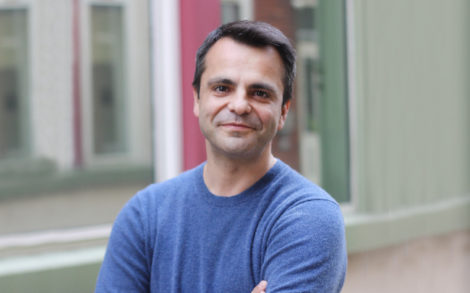 How did you come up with the idea for Omie?

As a repeat entrepreneur, I like to think that we can change the world. And after hours of dissecting food labels to find the right products that I wanted to give to my 4 boys…. And the eternal duality of Quality / Price.
I decided to take on the daily food products by eliminating the unnecessary intermediaries between those who make them and those who consume them. => To create a food brand that controls its products, manufactures them while paying the people who make them, and delivers them directly to the consumer without central purchasing offices or large-scale distribution.
To support this promise, we give 100% transparency to the consumer: who earns what, where it comes from -in real life-, how and with what it is made.

Who are Omie’s customers and why do they buy on the platform?

Families, singles… it’s pretty broad—people who understand that each purchase contributes to creating another tomorrow. We propose a calmer experience of buying daily food products. For each product, a reference that we have designed to the best of our ability: for health, for taste, for fair pay, for the planet. And invariably to propose products at affordable prices.

Don’t Omie’s values and positioning condemn your website to serve only a limited segment of the market?

We don’t. On the contrary, we think this is just the beginning, that we will inspire. The millions of scans on Yuka show consumers’ mistrust; the success of Who’s the Boss indicates that consumers are sensitive to fair pay. We all want to eat healthier and more respectfully. We already have 69 producers/processors supporting us and are determined to see the initiative grow. Their industrial tools are capable of growing with us. With our price positioning, made possible by the short circuit, we build an accessible and popular project.