TikTok has replaced Facebook in the hearts of teenagers. The share of 13-17s using Facebook dropped from 72% in 2015 to 34% in 2022. This is what research, published in early August in the United States, reveals and passed unnoticed. It tells us a lot about the latest Facebook statistics.

Use of social networks by young Americans: all the statistics

Statistics Social Networks 2022: uses that depend on gender, origin, age, and income

Beyond the basic figures on American teenagers’ use of social media, this research also provides the keys to understanding the variables influencing this use. It clearly shows that some social networks are more feminine and others more masculine.

TikTok is used by 73% of teenage girls against 60% of their male counterparts. This asymmetry is also observed on Instagram and Snapchat. On the other hand, Reddit is a more masculine medium (20% of boys versus 8% of girls), as are YouTube and Twitch.

The “ethnic group” variable also plays a role among TikTok users. Indeed, 82% of black teenagers use TikTok compared to only 62% of white teenagers.

Finally, we note the differences between the behaviors of teenagers according to their household income. The use of TikTok and Facebook decreases by 7 and 17 points, respectively, when household income increases from less than $30,000 to more than $75,000. 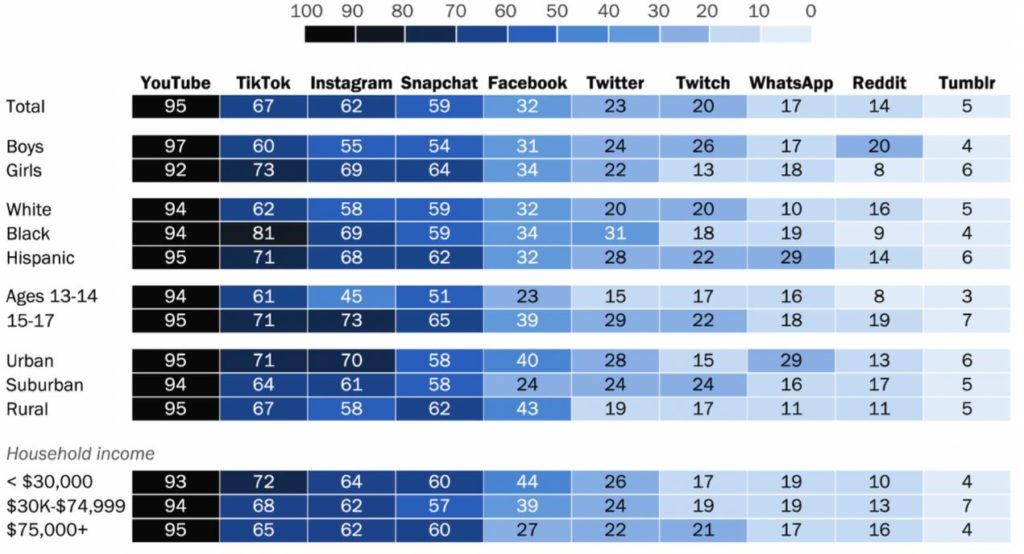 The latest Facebook statistics have the merit of quantifying what everyone suspected: the loss of speed of Facebook among young people. Facebook, perceived as a social network for boomers, will soon flirt with marginality if we believe the statistics.

The number of Facebook users among 13-17-year-olds has been divided by 2 in 7 years.

These statistics allow us to measure the challenges that await Marc Zuckerberg’s group. While Meta has diversified well, we see that users can compete and that social ecosystems (Facebook, WhatsApp, Instagram) are not necessarily permeable. Contrary to the uses surrounding the radio, for example, the transition from one social network to another is far from assured. A user who “starts” his life on social networks via Instagram has little chance of abandoning it to spend his time on a network perceived as “has been” (Facebook). The pressure on Meta is maximal because Facebook, the advertising money maker, is dead. There is an urgent need to invent the next blockbuster, and Marc Zuckerberg has put all his marbles in the Metaverse. Only time will tell if he was right.

Alphabet (Google) emerges from this research as the big winner. YouTube’s hegemony is unmatched. Not only do 95% of American teenagers use it (that’s everyone), but it is also the number one website in terms of frequency of use. 19% say they are on it almost constantly. That’s 1 in 5 teenagers, and it’s an understatement to say it’s worrying.

We have to admit that the proposed contents’ diversity and the recommendation algorithm’s performance make it a very efficient machine.

Infinite scrolling is the N°1 use

The research also reveals worrying statistics on the frequency of use. We learn that 4 applications/websites are at the origin of compulsive behaviors that are no longer anecdotal. Here are the percentages of American teenagers who say they are “constantly” on:

These apps/websites have in common that they have implemented infinite scrolling, a time-consuming innovation that has been debated in California to be banned.

54% of American teens say they would have difficulty leaving social networks. And that’s a problem. As a clinical psychologist reminds us in an interview for a French media outlet, there is a deterioration in the psychological state of teenagers.

“Since 2019, the numbers have exploded with more than 126% of emergency room visits for suicidal ideation among 11-17-year-olds and a 30% increase in suicide attempts”.

Social networks lock up and harm the social and emotional construction of adolescents. The opinion bubble (or filter bubble) theorized by Eli Pariser is ultimately a social bubble. Permanently connected with the whole world, teenagers are far from here. Marc Zuckerberg and his idea of the Metaverse notwithstanding, human beings are built first and foremost through real interactions.

To all parents: it is more urgent than ever to cut off our teenagers’ smartphones and bring them back to the real world.