This YouTuber has 50 million subscribers, and that’s not good news

Home » This YouTuber has 50 million subscribers, and that’s not good news

For the end of the year 2020, MrBeast, YouTuber with 50 million subscribers, has put online a video that is symptomatic of the evils of our society. This video was truly disgusting to me because, in addition to being useless, it promotes the values that destroy our living together. And yet it has already garnered 30 million views.

MrBeast offers us the distressing spectacle of our addictions and the values that motivate us.

First of all, a little reminder for those who don’t know who MrBeast is.

Jimmy Donaldson of his real name is a YouTuber star in the United States whose first video went viral and would make even the most hardcore “performance art” fans jealous. In this video, which has accumulated more than 20 million views, MrBeast is filming himself as he counts up to 20,000,000 views in the … 100000. It’s fascinating and lasts 24 hours. 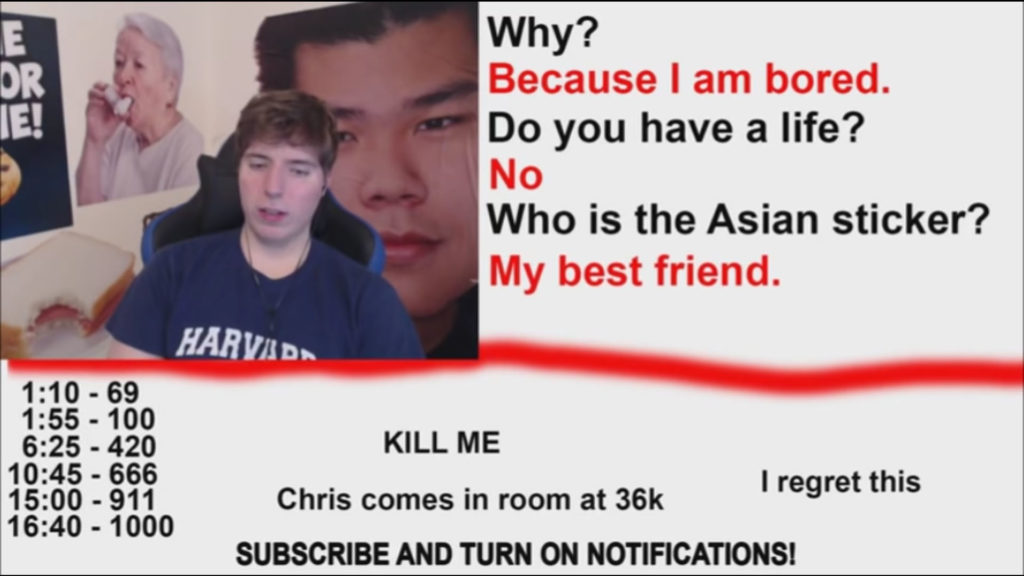 We also learn that the average cost of making his videos is $300,000 and that he employs 50 people for production and logistics (if you don’t have such resources, check this article on how to start a successful YouTue channel).

All these impressive figures would make you dream if the videos themselves were up to the task. But the least we can say is that the message they convey is catastrophic.

The average cost of making his YouTube videos is $300,000, and MrBeats employs 50 people for production and logistics.

Why MrBeast videos are decadent and unbearable

I have to admit that I didn’t know MrBeast before I read the Bloomberg article. His success is unbelievable, and I am delighted for him. But it comes at a price: the degradation of those who watch his videos.

If his first video could still make people smile (nearly 120k comments and 1m of “blue thumbs” anyway), what about the following ones? Here are a few titles chosen at random:

Lots of numbers, lots of zeros, and one thing in common: the promotion of gain, materialistic values, and competition. His Christmas video (“I put 1,000,000 Christmas lights on a house”) in particular is a masterpiece of its kind.

In 15 minutes, a day, you can learn a foreign language. And in 15 minutes spent on YouTube?

MrBeast and his million Christmas lights

As you can see, MrBeast likes to go over the top. In this sense, he has well understood the human nature that the dose of dopamine will only come with ever more insane objectives to reach. This race to excess is made by playing on the lowest instincts of the human being. His Christmas video gives us a luminous demonstration of this.

For the latter, MrBeast announces having bought 3 houses and 1.7 million Christmas lights. He then set up 3 teams of 2 people each. The aim of the game is simple. The team that best decorates its house will be able to keep it. The youngest participant is 18 years old. 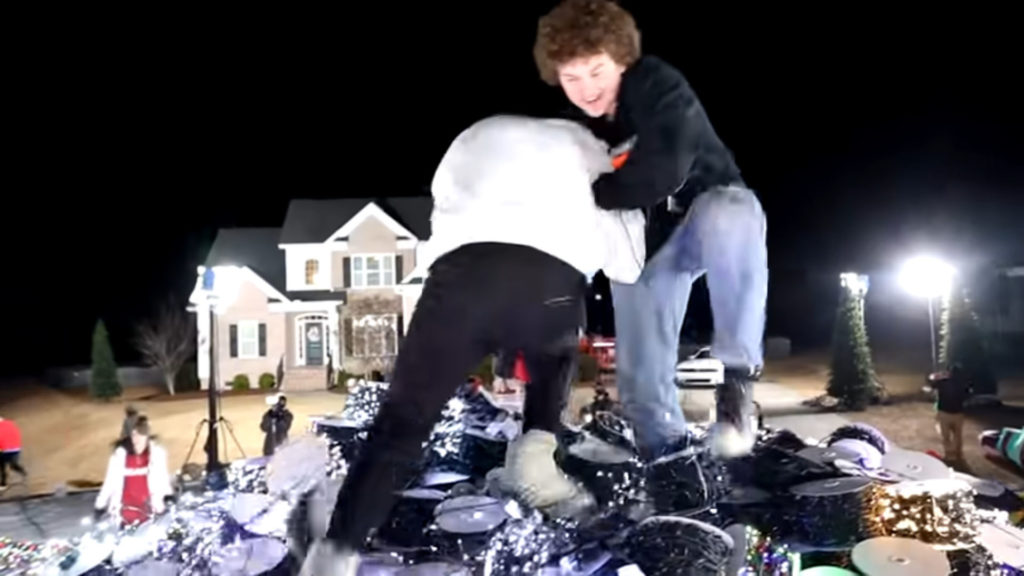 The countless Christmas lights are collected between the houses. Each team has a set amount of time to decorate “their” home, which results in a few fights on the heap of garlands. Life is a struggle, even when making “his” house more beautiful than his neighbours. 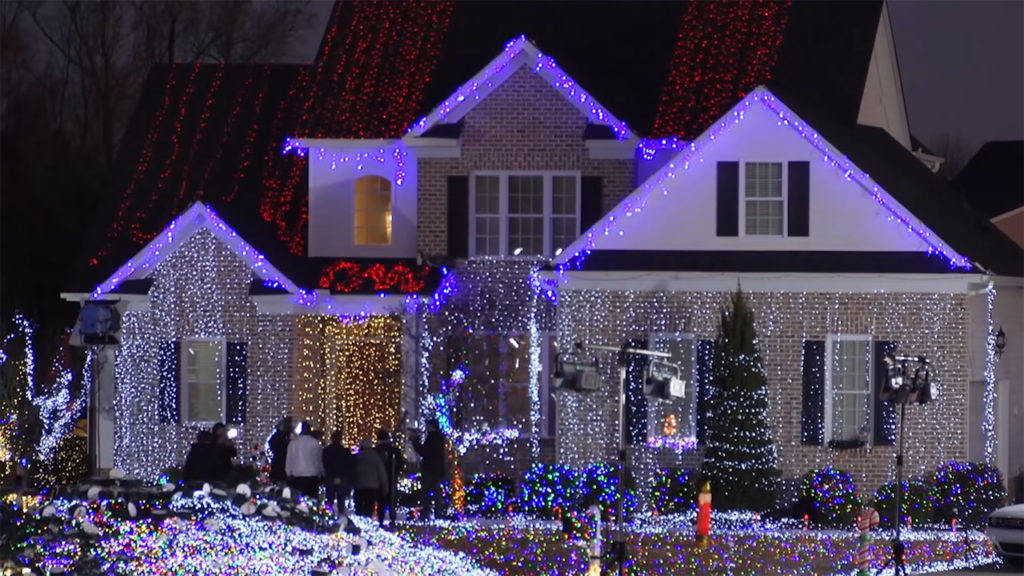 The results are up to the challenge. The lighting in each home must consume the equivalent of the daily output of a nuclear power plant. At a time of global warming, you will appreciate the message conveyed. 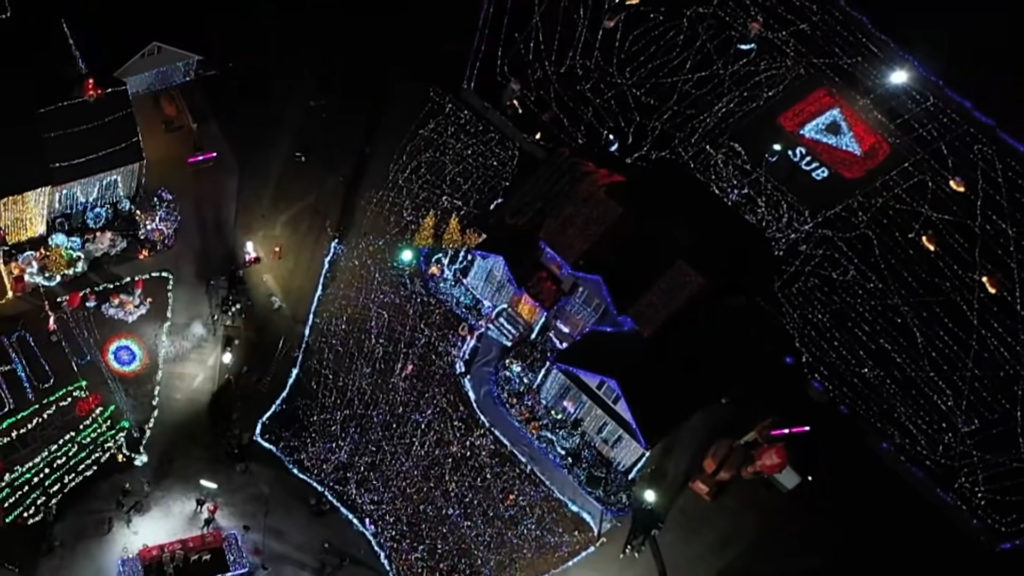 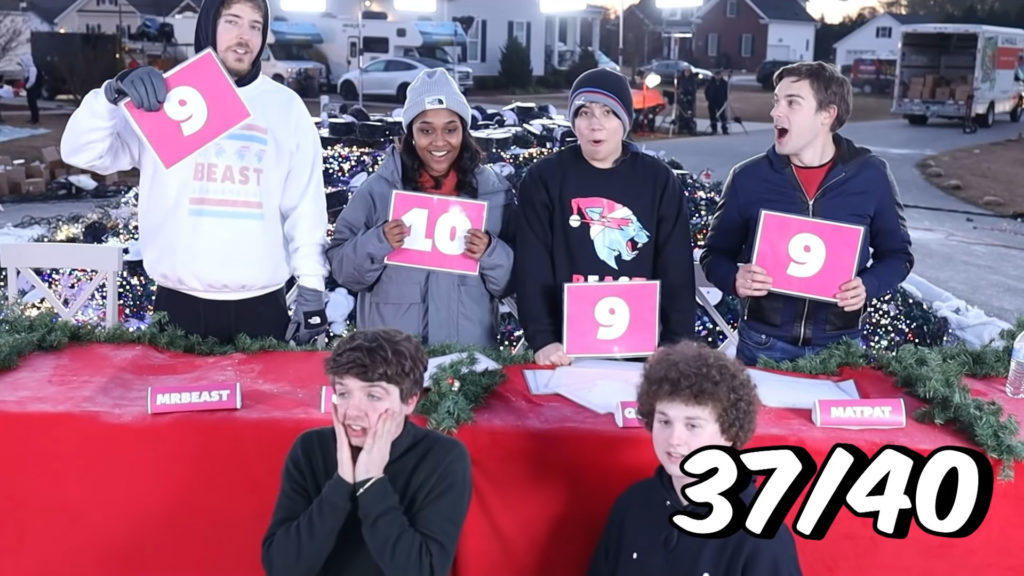 You will note the irony. These 4 YouTube products will therefore decide the outcome of a “contest” posted itself on YouTube.  I’ll save you a few minutes of useless viewing by revealing the names of the winners … it’s the 2 kids in the picture. The one on the right is 18 years old. 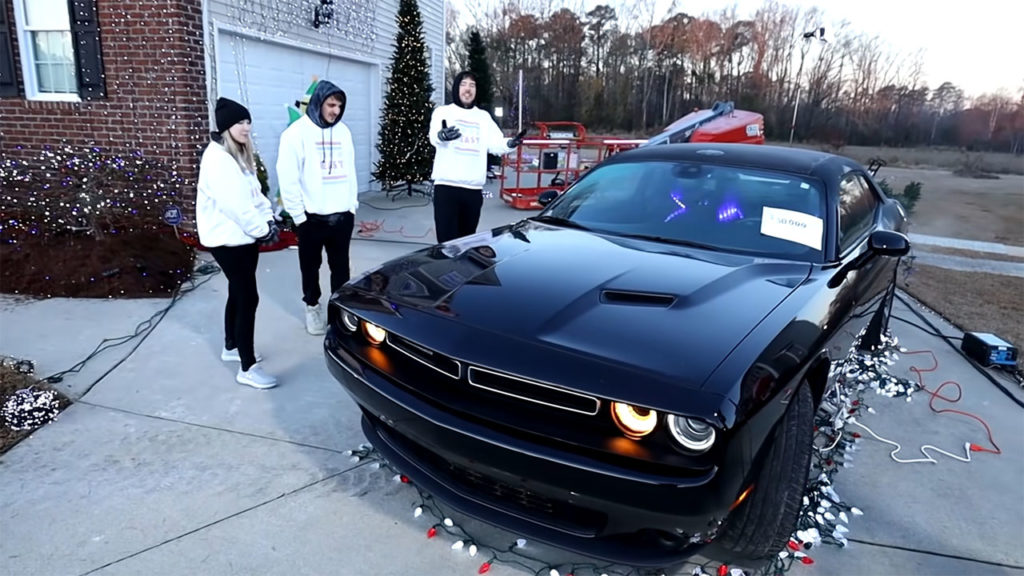 MrBeast also has an eye for the losers, offering them a beautiful sports car worth $30,000. Despite Mr Beast’s efforts, the losers can’t hide their disappointment.  At least when someone won a car in the Price is Right 10 years ago, he was happy. But in 2021 young people have become very ungrateful.

Where am I going with all this? MrBeast offers us the distressing spectacle of our addictions and the values that motivate us.

Addiction first of all to the biggest, strongest, most expensive, most beautiful and so on. Today it takes a ton of superlatives to get “views” and “likes”. Without this debauchery, it is impossible to capture the Internet user’s attention who, like the heroin addict, needs an ever-increasing dose of emotion on YouTube.

Values. You have to do better than your neighbour, spend more, get bigger or taller than others. The spirit of competition has replaced the spirit of collaboration. Individualism has replaced the gregarious instinct of the first settlers. The Other exists to be surpassed, to be beaten. He is now only a point of comparison.

Doing something sensational and exaggerated is the only reason for MrBeast and other YouTubers in the “entertainment” business to exist. On the one hand, they exploit the flaws of human beings and their thirst for dopamine. On the other hand, they also influence the YouTube algorithm‘s deficiencies, which is calibrated to maximise the hours spent on the platform and the addictive content.