Zero waste: these 8 initiatives are changing the refilling experience

The market research of “zero waste” shows that it is in full growth. Initially, a phenomenon reserved for specialized stores and a niche audience, “zero waste” initiatives are now spreading to the mass market. No longer affecting only food brands, and are being used as a growth driver by the FMCG (Fast Moving Consumer Goods) giants.

In this article, we present 8 exciting bulk sales initiatives from all over the world.

As the following article will show, many initiatives are to develop recycling containers and the filling of products sold in bulk. The “refill” is fashionable but isn’t it a marketing gimmick? The recycling of containers is nothing new. Containers have always been a source of wealth for people. The Egyptians were buried with their pots (the famous “blacktop”) as early as the Predynastic period, the Romans with their perfume bottles, the Celts with their cups. It is only very recently that containers have become “disposable.”

Consumerism and the plastic industry have formed an infernal couple that has sacrificed durability on the altar of practicality. The rule of least effort became the mantra of 20th-century marketing. Marketing in the 21st century is torn between the need to “make people consume” and the need to revive a practice (reuse of containers) that was eliminated 50 years ago.

The examples below show how ingenious it is to offer a customer experience that makes consumers want to reuse containers. Proof if we needed it, that marketing is full of contradictions.

Which brand was the first to launch the “refill” concept? It’s hard to say, but what is certain is that Guerlain was undoubtedly a pioneer brand in this field. Back in 2011, I had photographed their recharge station in their historic store on the Champs-Élysées. 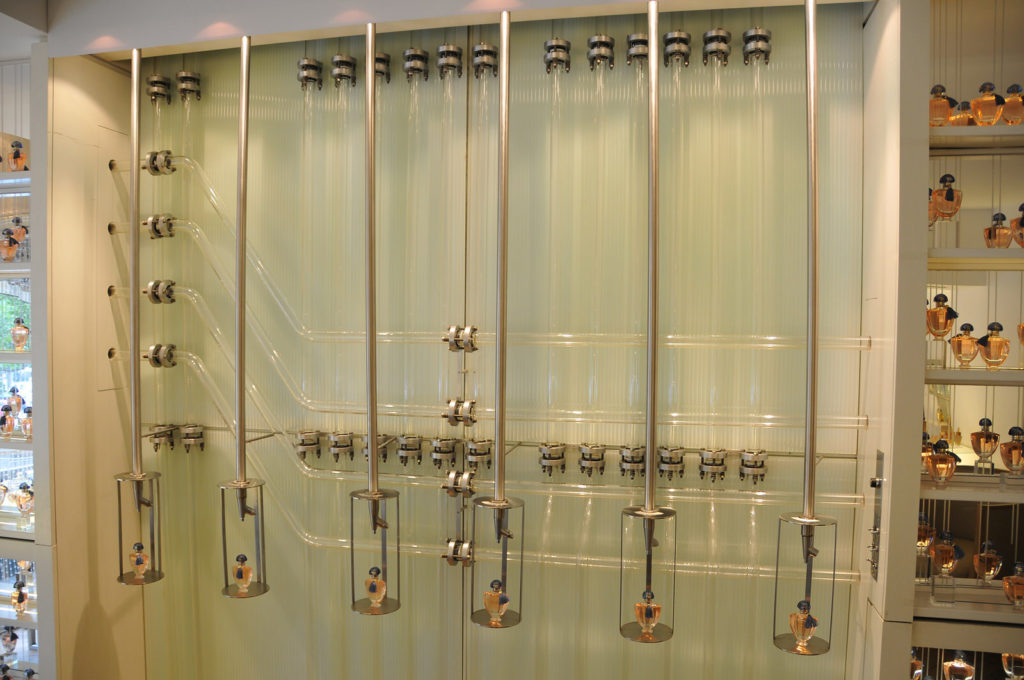 When we visited Guerlain’s historic Champs-Élysées store in 2011, it was already possible to refill perfume bottles on the first floor.

In the video below, the somewhat “artisanal” aspect of the refill operation (perfume bottles with “taps”) reminds us how old the concept of refills is. When containers were scarce, and the “all plastic” and “all disposable” were not yet the norm, it was customary to reuse containers.

Of course, the challenge in marketing is to transform the customer experience. The flagship store on the Champs-Élysées succeeds perfectly in doing so, as do the Guerlain containers. Guerlain is the only brand I know of that offer to buy its perfumes in large containers. On the website (see screenshot below), 500 ml bottles are available, but you can buy one-liter bottles or more at the boutique. 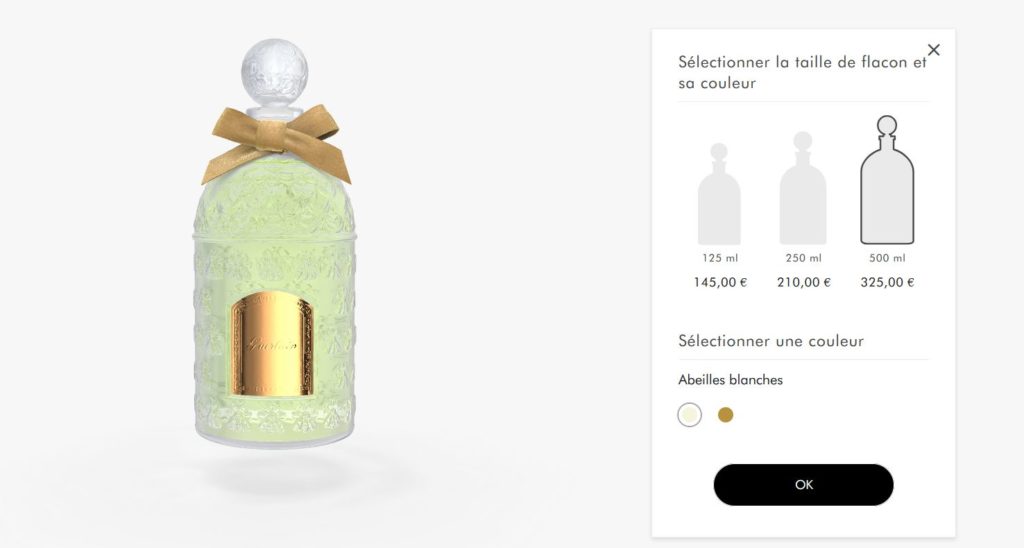 The video is just like the experience offered by Biotherm’s refill station: classy.
Biotherm is a brand of L’Oréal. L’Oréal has already tested the principle of refilling through the 1200 “sources” of the perfume brand Thierry Mugler, whose license it bought in 2018.
Except that when you want to refill cosmetics, the constraints are not the same as with a perfume that contains alcohol. So, the refill station developed with Possible Future allows you to rinse the bottle and disinfect it with UV rays.

The first example of the “Life Plankton Elixir Blue Fountain” was installed in 2021 in Madrid in the department store El Corte Ingles. You can refill a single bottle 5 times before it needs to be replaced. The refill operation is performed by an employee in front of the customer.

Algrama : Refill on wheels and on demand

If you don’t go to the charging station, the charging station will come to you. That’s the concept behind Algrama. The Chilean company uses three-wheelers in Santiago, the capital, to refill their containers with cleaning products. Dog food is also offered in bulk. Unilever and Nestlé supply the products.

Pretty tricycles, acid colors … We feel that they did not do the marketing on a table corner. It is even possible to order a refill via Uber Eats. The QR code provided then allows you to deliver the right amount of product when the tricycle is in front of your door.

The antithesis of the stylish “refill”: the chocolate spread at Färm

Färm is a chain of committed organic stores. It’s marked on their website, and this militant aspect is somewhat reflected in the store’s style. Contrary to this article’s very “marketed” initiatives, their chocolate spread refill stations are a bit the marketing antithesis of what should be done.  The machines look a bit “rough,” the process is entirely manual (no touch screen, you have to choose your “grind” and press a switch), no guidance. The handling errors of previous customers (see photo below) lead to a disagreeable aspect of the refill station.

To be accepted and favored by the customer, product charging must offer a flawless and effortless customer experience. So, there is room for improvement here. 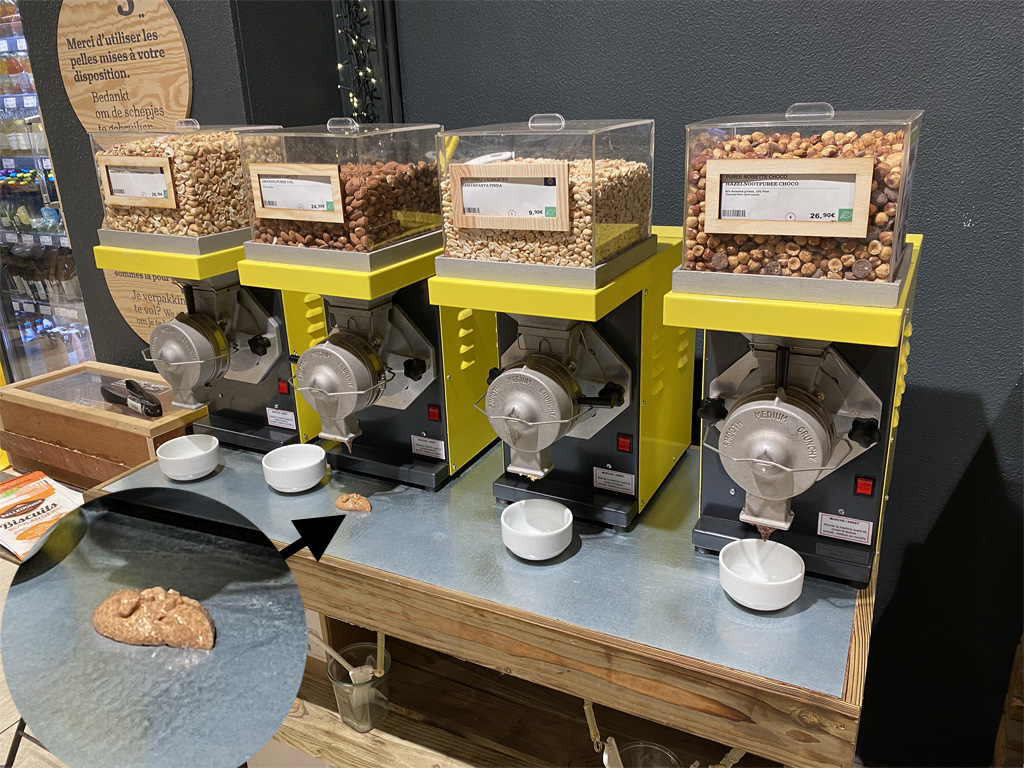 Love Nature: a brand whose DNA is in zero waste

Love Nature is not a brand from a small manufacturer. Henkel launched it, the German cleaning products giant. The brand was launched in September 2020 and was directly thought to be distributed via refill stations.  It is currently available on the German market in DM stores.

It works traditionally. Containers made of 100% recycled plastic are available on the side of the refill station, where there is also a scale to check the amount of product. The customer scans the empty bottle (QR code), and the refill options appear on the station’s touch screen.

Sedal is a Unilever shampoo brand. Stations have been set up in Walmart supermarkets to refill aluminum bottles.  The consumer wins because the refill costs less than the product in a new package.

The interest of the concept, which should deploy in 2021 in 500 Walmart Stores, is also that it does not consume electricity. Thanks to this innovation, Unilever has been voted Supplier of the Year by Walmart in Mexico.

I really like the Amore Pacific charging station. It’s a mix of Asian design and refinement with a touch of technology.

The Korean cosmetics giant (more than 2000 references) has installed this charging station in its flagship store in Seoul. The range offered is more comprehensive than the average of the initiatives we have identified. No less than 15 references are proposed. The containers are made from coconut and are sterilized before use. Unlike other more “techno” stations, there is no touch screen or automatic filling here. The system is still a bit traditional (with scales to weigh the product), but you mustn’t forget that in Korea, you are served. This is a significant cultural difference that influences the functionality of the refill stations.

If there is one brand that had to offer a refill station, it is Ecover. The Belgian brand of cleaning products has based its success on respect for the environment and reducing its environmental footprint. It is, therefore, natural that it launched its first refill station in collaboration with Sainsbury’s. I couldn’t find a video of the Ecover refill station, but you can see it in pictures here. You’ll see that the codes used, especially the wood, fit well with the brand’s image.