At the time of the terrorist attacks in Paris in January 2015 (Charlie Hebdo) I was asked in a radio interview to analyze the merchandising phenomenon that was witnessed. All kinds of objects with the “#JeSuisCharlie” logo suddenly appeared on marketplaces like Ebay and Amazon.

After the attacks on Nov 13, I was once again interviewed by the public Swiss national radio TSR to comment on the phenomenon (the interview, in French, can be listened to from 12:00 by following this link).

Two main questions are discussed in this interview :

Merchandising after the terrorist attacks

After the Nov 13 attacks in Paris, we witnessed the same phenomenon as after the Charlie Hebdo attacks. Tee-shirts, books and myriad other goodies suddenly popped up on Ebay and Amazon. In the meantime, Ebay learned its lesson and has improved automatic systems to block such sales. Goodies remain however largely for sale on small online shops (see screenshot below) 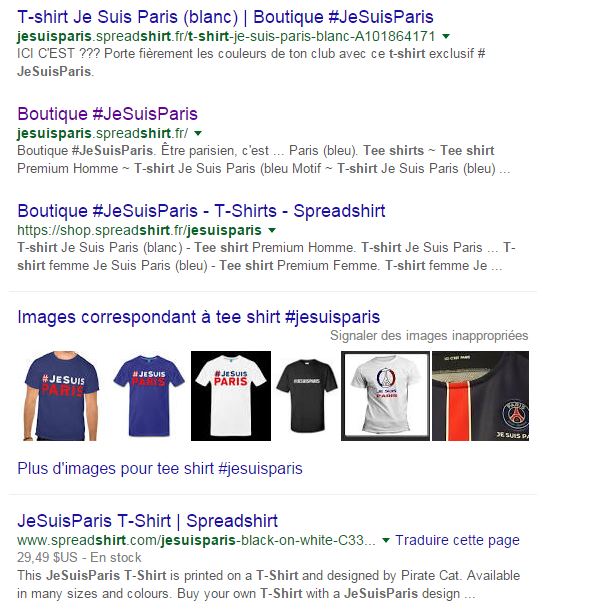 As I explained in the post I published in January, there’s only one explanation to this phenomenon : Greed.

Most probably those who are selling the #JeSuisParis goodies today are the same who tried to profit from the January attacks. They were ready, from an operational viewpoint, to start the business again. The time windows to make profits is really small ; emotions diminish with time and so does the probability to sell.

Why is there a business around #JeSuisParis objects

Human Beings have not evolved to put up with high emotional charges. When the emotional threshold is reached, reactions naturally follow. It can be physiological reactions like tears and screams. When emotions are somewhat lower, impulsive behaviors can follow to identify to a social group. This is what happened when you buy a #JeSuisParis or #F***Isis tee-shirt : you want to give evidence to others that you share the same emotions and, as a consequence, that you belong to the same group. Such actions are perceived as ethical, contrarily to the murders of the terrorists. Note that the same happened after Charlie Hebdo : subscriptions went up almost 20 fold, from less than 7000 to more than 120000 in a few days. Only 50% were yearly subscriptions; the remaining was made of 3-month and 6-month subscriptions.

Whereas smaller opportunistic firms try to take advantage of human emotions to make profits, larger and better known organizations should not. Consumers would not forgive companies such an inappropriate behavior and would certainly retaliate (through negative word-of-mouth for instance).

At least two examples of bad communication have been witnessed in the last 2 weeks; the first one by Grand Optical, the second by a company called “Pray For Paris”.

Grand Optical started a communication campaign just before the attacks to promote round-shaped glasses and used the picture of John Lennon for this. 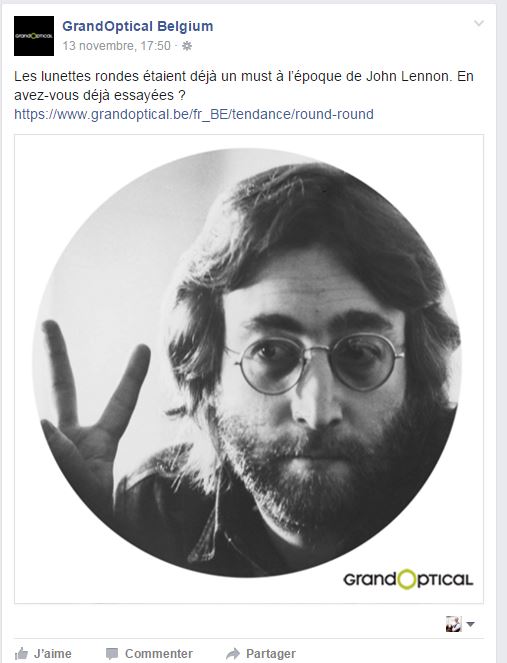 It remembered people the song “Imagine” that was played by German pianist Klavierkunst on 14 Nov.

Without checking whether it was a coincidence, people accused Grand Optical of making business with human emotion.

The second case (“Pray For Paris”) was revealed only recently when people discovered a company called “Pray For Paris” and accused it of the same. Newspapers showed however that this company had been founded in 2011 and existed therefore well before the attacks.