The raw data came from Ahrefs. We used Anatella to prepare and clean the data and Tableau to visualize it.

This research’s main result is that there are untapped opportunities to rank on the first page of Google on English keywords outside English-speaking countries.

Here is what we learned.

Some figures from our SEO research 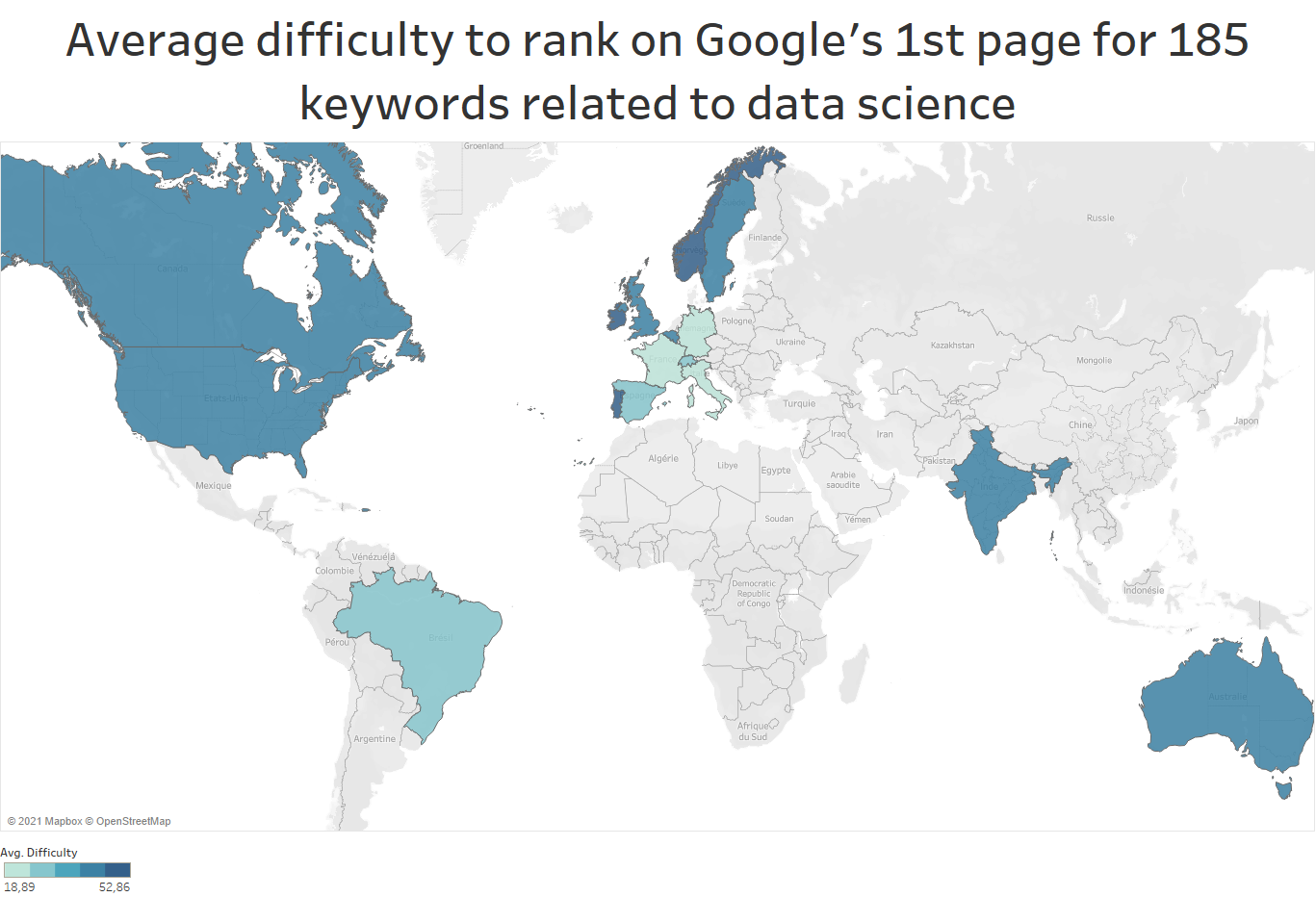 Key Learning: don’t stick to such global statistics. The average domain rating is undoubtedly an interesting indicator. Still, as we will see in the rest of this article, it is by examining the data that we will discover extraordinary opportunities.

Canada is the competitive country for data science keywords

The average DR for Canadian pages is 82. 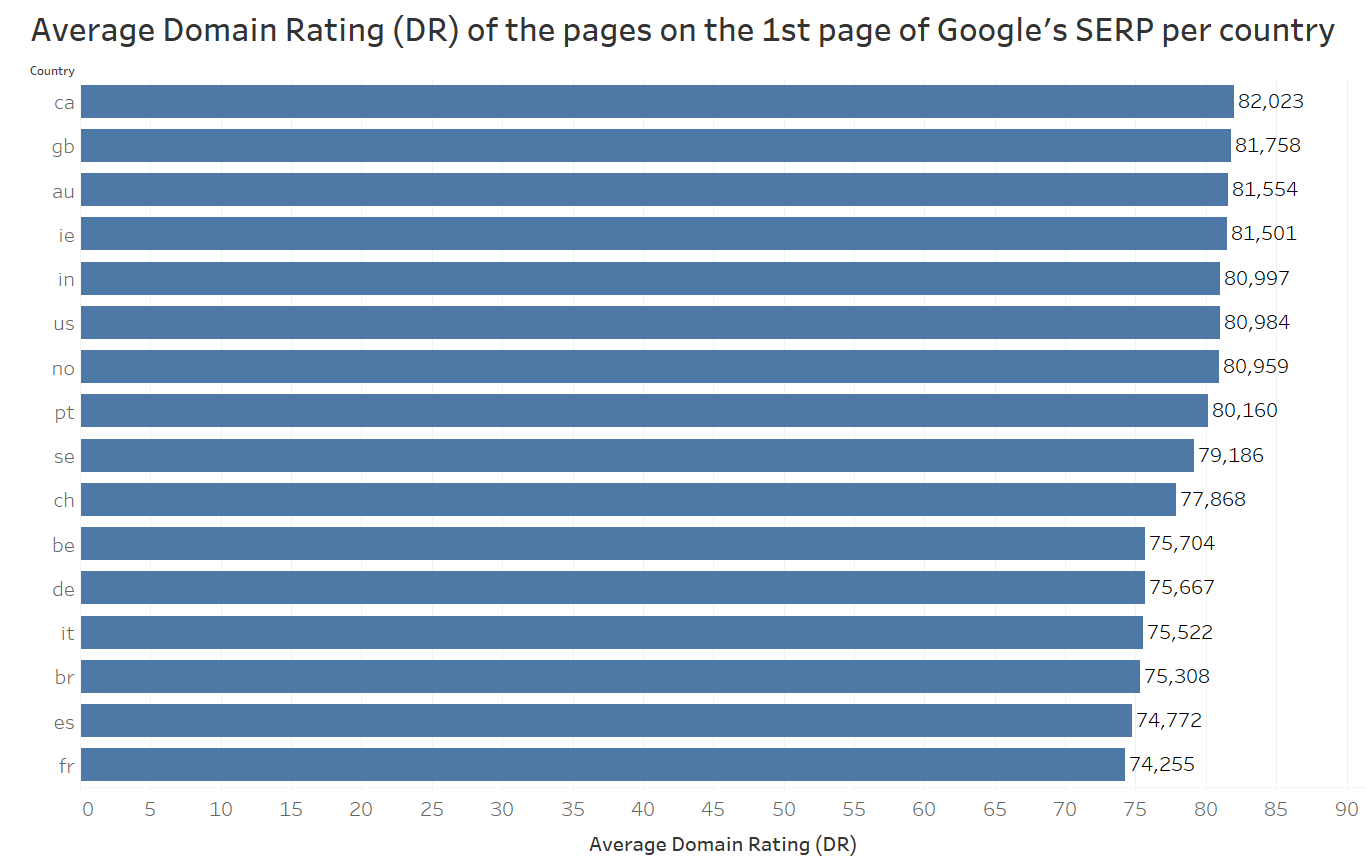 In English-speaking countries, the difficulty of appearing on the first page increases with the volume of research. Not in other countries.

Logically enough, the difficulty of appearing on the first page of Google increases with the volume of queries in English-speaking countries. On the other hand, this is not the case in non-English speaking countries.

As you can see in the graph below, our research shows that the difficulty is constant, regardless of the volume of searches. 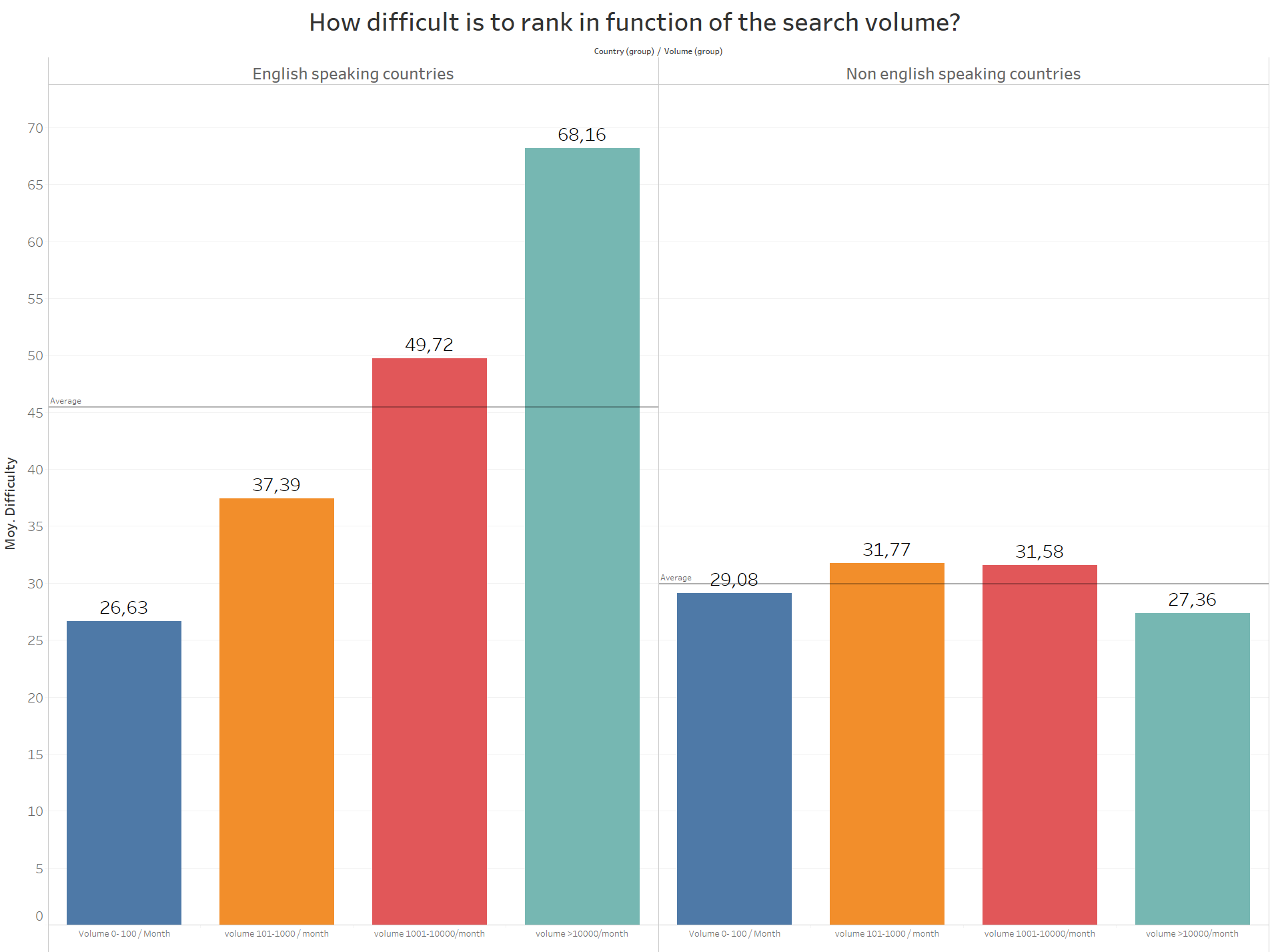 Key Learning : identify English requests with high volumes in non-English speaking countries. On average, these requests are no more difficult to ” find ” than those that generate less traffic.

In Ireland, the keyword “Cloud computing” is worth $85 (cost per click!), and the difficulty of being on the front page of SERPs is evaluated at 87. The average domain rating of sites on the first page is 91!

On the other hand, the situation is much more contrasted in non-English-speaking countries. Apart from the fact that none of the keywords studied is evaluated at more than 35$ per click, we realize that some costly keywords are, in fact, very accessible. In Germany, for example, the term “private cloud” is worth $19 per click, generates traffic of 16000 per month, and yet the difficulty to rank in the top 10 search results is only 5. 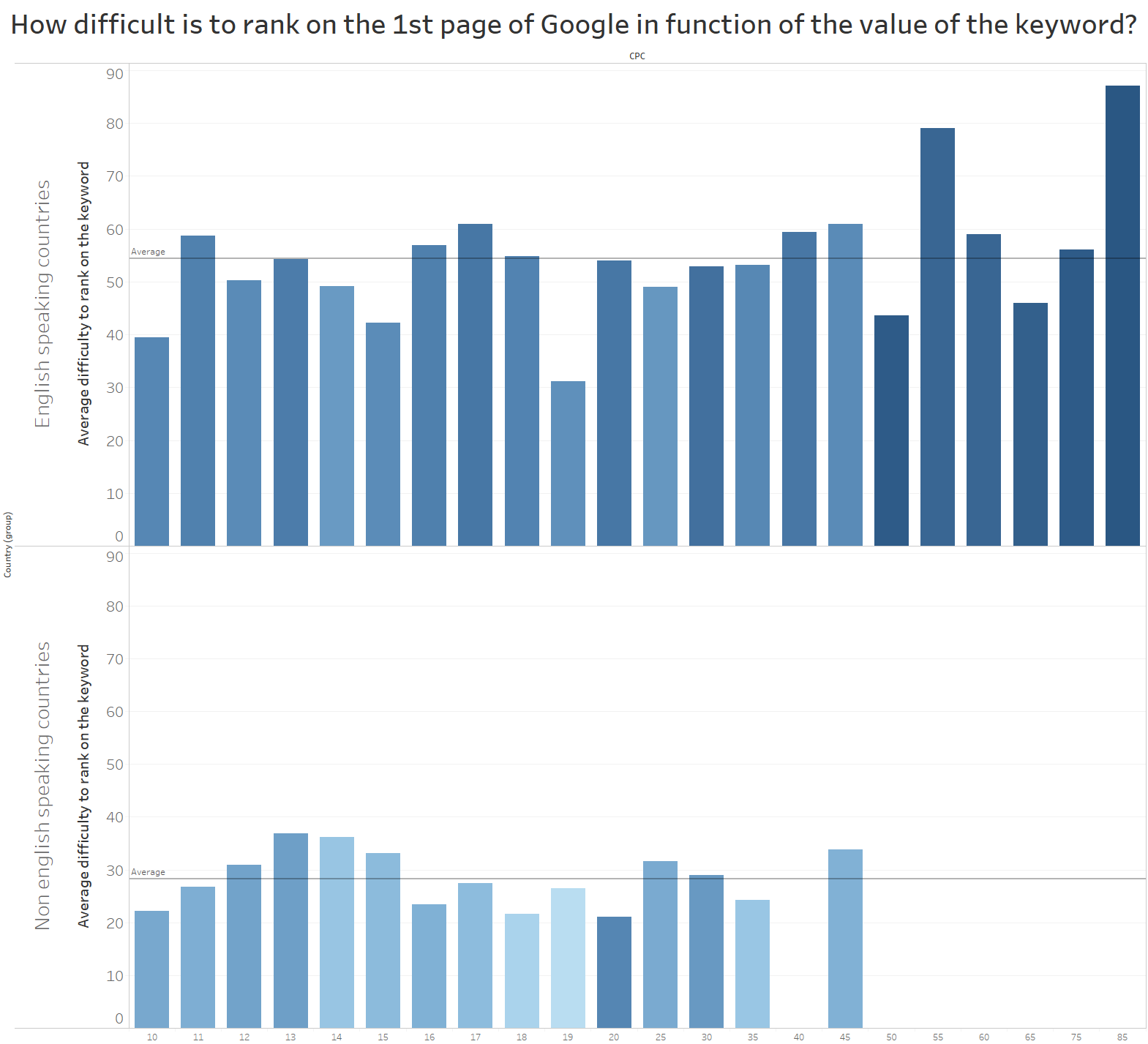 Key learning : we can quickly identify countries where high added value keywords are still easily accessible by using our dashboards. 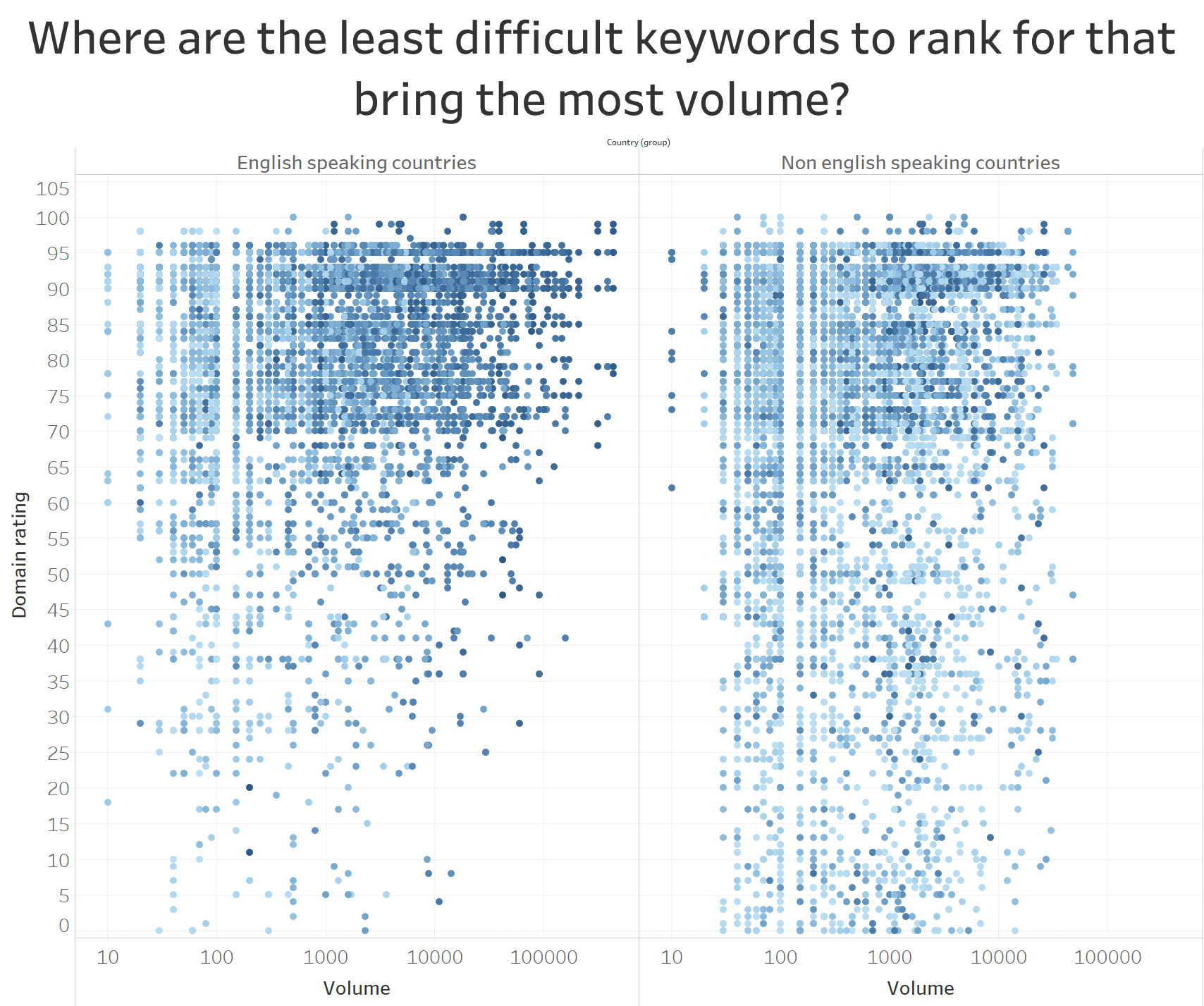 The graphics above may not be the easiest to read, but they are essential to understand how to improve your SEO and increase traffic to your website.

On the graph, I have represented each keyword according to the monthly traffic and the keyword’s difficulty. I grouped the English-speaking countries on the left and the others on the right. You can see that there are no more points on the left, as soon as the volume exceeds 10000/month. In other words, in English-speaking countries, as soon as the volume exceeds 10,000/month, the keyword’s difficulty increases accordingly. In non-English speaking countries, this is not the case. Some requests generate substantial traffic and whose difficulty remains accessible. 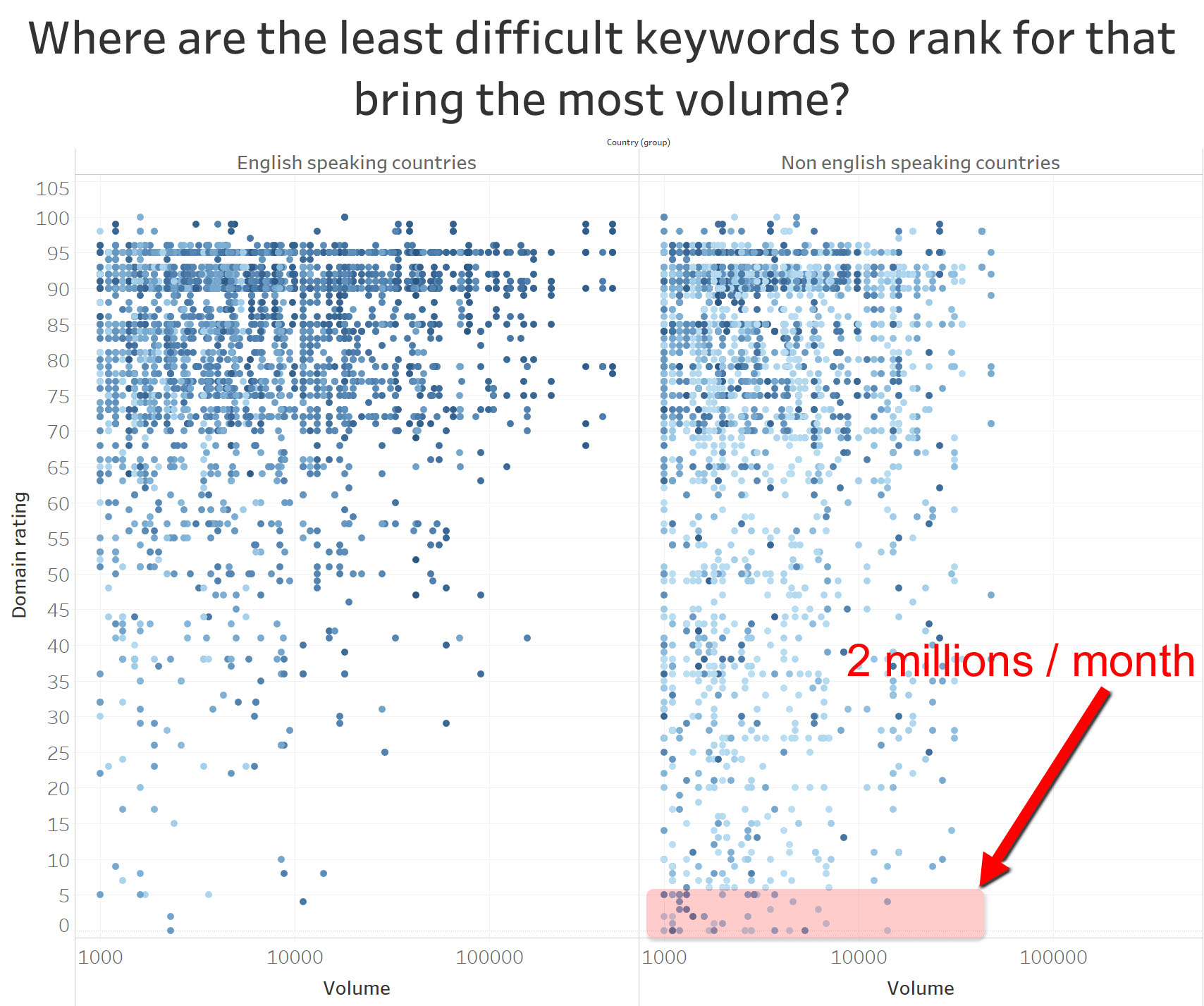 Everything becomes more transparent with the graph above, in which I have only taken into account research volumes > 10000 / month. You can see that there are many more opportunities to rank well for high volume queries on the right.

Key learning: what should be remembered from these graphics? That there are many untapped opportunities to search for traffic in non-English speaking countries using English keywords. Can you believe it?

We have prepared a glossary of data science terms based on this KDNuggets article to carry out this research. We then completed the glossary with terms found on other online reference pages, and we eliminated generic terms that could have returned results unrelated to data science.

We injected the resulting list of keywords into Ahrefs. The exported files were processed with Anatella (see data preparation sequence below) and the data visualized using Tableau.