The Mitsubishi SpaceJet is a textbook case for those who want to apply Porter’s 5 forces matrix, a tool for conducting competition research. The SpaceJet is a Japanese aircraft whose development has just been stopped in October 2020. It will allow us to illustrate 2 essential dimensions of Porter’s matrix:

In this article, we will guide you through these 2 aspects.

The Mitsubishi SpaceJet in a nutshell

The SpaceJet is a regional aircraft developed in Japan by Mitsubishi Heavy Industries (MHI). The development programme was launched in 2012, and the maiden flight was carried out in 2015.
The particularity of this aircraft is that it was designed by Mitsubishi, which is also a supplier to Boeing. Mitsubishi is renowned for producing the best wings in the world.
The end of the SpaceJet programme should have been announced on 30 October 2020. The Covid-19 crisis has been used as an excuse, but the reasons for the failure are deeper. The programme has swallowed up 8 billion Euros and certification to fly in the United States was not obtained in 2015. 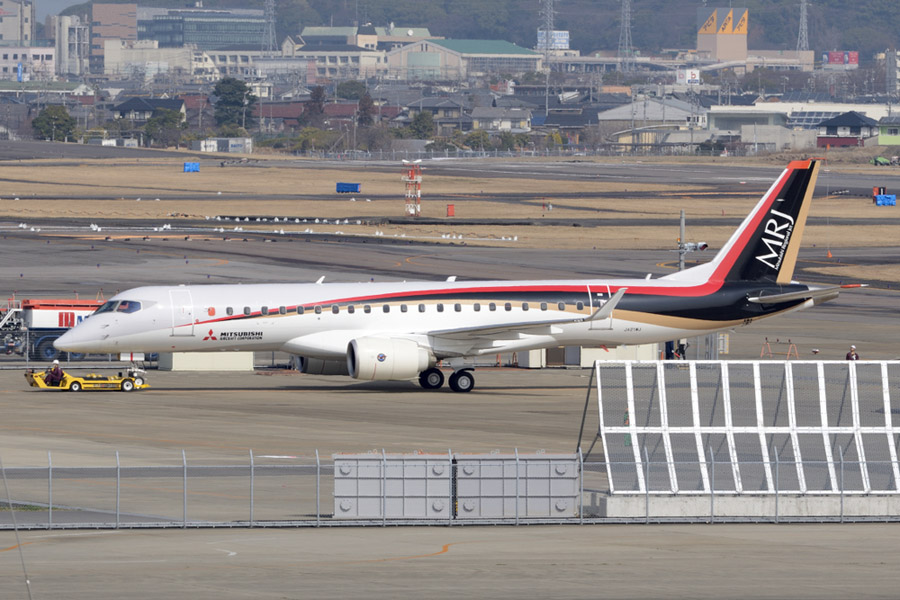 Porter’s 5 forces matrix is a framework for competition analysis. Invented by Michael Porter, it allows the research of competition by successively analysing 4 “forces” that act on a fifth.

They exert their effects on a 5th force: the intensity of competition.

A SlideShare course is available below if you would like to explore this further.

To explain the negotiating power of suppliers, it is usual to question a supplier’s ability to achieve forward integration (not to be confused with vertical integration, which reinforces the client’s negotiating power). Forward integration is the strategic move by which a supplier decides to use its capabilities to no longer supply part of a product, but uses its know-how to deliver the entire product to the market. The Mitsubishi SpaceJet is a textbook case.

Mitsubishi is an aeronautical equipment manufacturer supplying Boeing’s wings in particular. This component is crucial for the quality of the aircraft and, as such, already strengthened Mitsubishi’s negotiating power.

By deciding to produce its aircraft, Mitsubishi is achieving forward integration. The skills and know-how are used to move from the status of an equipment manufacturer to that of an integrator. Thus, Mitsubishi depends less on Boeing for its outlets, and its negotiating power is reinforced.

Does the bitter failure of the SpaceJet mean that Mitsubishi’s bargaining power has been reduced? Not necessarily, because this industrial misadventure will also have enabled Mitsubishi to strengthen its skills in a whole series of fields. Mitsubishi’s wings are better than ever, and the Japanese industry as a whole will have strengthened skills that are very useful to Boeing and Airbus.

The strategic interest explains the intensity of the rivalry between competitors

How can it be explained that despite the failure of the certification in 2015, investments in this programme have continued? This perseverance must be seen as a strategic challenge for Japan. The SpaceJet was, in fact, a technological standard-bearer, as was the Concorde for the Franco-British aeronautics industry. Developing a regional aircraft was seen by the Japanese authorities as a national strategic challenge. The pressure from the neighbouring country, China, which was developing its aircraft, was no doubt a factor in this.

The strategic stakes thus explain the intensity of the efforts made to compete with Boeing and Airbus.

The example of Mitsubishi Heavy Industries’ SpaceJet allowed us to illustrate 2 factors that will enable us to examine the competition using Porter’s 5 forces matrix.
The first factor is called forward integration and contributes to the evaluation of the suppliers’ bargaining power.

The second factor is the strategic stake. It helps to explain the intensity of competition.