LVMH, Prada, and Richemont have announced the creation of the Aura Blockchain consortium. This alliance in the blockchain meets 3 strategic objectives:

The history of the Aura Blockchain

The Aura Blockchain was launched in 2019 when the blockchain in the luxury watch industry was undergoing initial testing (see below). The project aims to assure customers of these “houses” of the authenticity of the product purchased. In 2016 the European Commission estimated that customs seized 41 million counterfeit items for a value of €670m. This is, of course, the visible part of an iceberg whose submerged part is primarily made up of counterfeit luxury goods.

By creating the Aura Blockchain Consortium and opening it to all luxury brands, LVMH, Prada, and Richemont confirm the interest in this technology and their will to defend their positions.

The first brands to join the Aura Blockchain Consortium are Bulgari, Cartier, Hublot, Louis Vuitton, and Prada. All other luxury brands are welcome to join, proof if any were needed, that this initiative indeed aims to create a counterbalance and is therefore of strategic importance for the growth of the companies concerned.

The challenges of traceability in the luxury sector

In the field of luxury, there are two levels of traceability:

The blockchain is supposed to ensure the traceability of the product at all stages of its manufacture, manufacture that has become, with globalization, increasingly global and poses real questions in terms of value perceptions. Unfortunately, the Aura Blockchain will not reveal the “other side of the story.” Its purpose is not to give indications on the geographical origin of products nor on manufacturing conditions that have already been denounced many times by the media. The transparency claimed by the Consortium is therefore only partial. One could speak of a semi-opacity. The consumer is reassured about the extrinsic value of his purchase, but the intrinsic value (cost of raw materials, labor costs) remains hidden.

Better control of the second-hand market: the hidden priority?

The other strategic issue behind the Aura Blockchain is the control of the second-hand luxury market. Objects sold by luxury brands are, in essence, cared for and have a potential for value (the Kelly bag by Hermès is an excellent example). They have a longer than average lifespan and can therefore find new owners during their lifetime.

The resale of these luxury objects has allowed platforms like Vestiaire Collective to emerge, depriving the big Houses of additional income but above all of the direct link with the new buyers. When a luxury item changes hands, it is the manufacturer who loses the traceability.

With the Aura Blockchain, the big Houses are trying to restore the balance and hunt on the territory of the online platforms.  They are equipping themselves with a technological weapon to maintain a link with each owner and, potentially, communicate with them.

That’s it. The manufacturer knows who the new owner is and can even communicate directly with you.

The use of the blockchain in the luxury sector is not a novelty. To see this for yourself, you only need to look at the projects that have been launched in the luxury watchmaking sector.

Hublot has undoubtedly been a pioneer in the use of blockchain. As early as 2018, this brand, which positions itself as a very tech-oriented player, launched a watch (the Big Bang Meca) that could only be purchased in bitcoins. One hopes for Hublot that they kept the bitcoins and multiplied their investment.

Hublot’s Big Bang Meca could only be purchased in bitcoins. It was launched in 2018.
Image : Copyright Hublot.

Vacheron Constantin presented its blockchain-based certificate system at Viva Tech in Paris in 2019. The technology used is that of Arianee, an open-source standard proposed by the eponymous company. The certificates are since November 2020 integrated as a service within the Hour Club, the club of Vacheron Constantin owners.

Ulysse Nardin has been using blockchain to certify the origin of all its watches since November 2019.

Breitling launched its #BreitlingSelect offering in March 2021. Within it is integrated a digital passport based on blockchain. 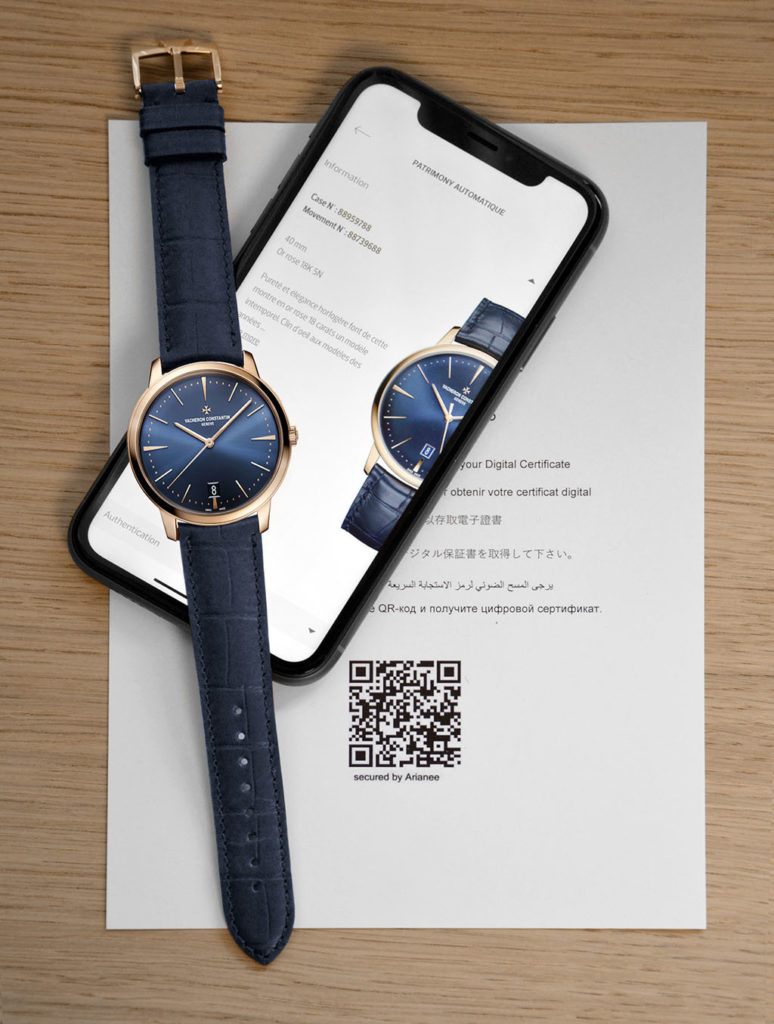