The energy crisis is the beginning of a tragedy in 6 acts that will lead to the end of the European project by 2024 and the collapse of the European economy. What will happen between now and 2024 in Europe? How will current events unfold, and what consequences will they have on our lives? Are we living in the last glimmers of democracy and Europe?

The demise of the European project will take place in 6 stages (click on the links at the beginning of each section to access the full development):

In 2021, politicians were trying to reassure themselves and the general population about the transitory nature of inflation. In February 2022, when the conflict in Ukraine broke out, they had to admit that inflation was here to stay. They lost face once.

When the sanctions against Russia were put in place, the crushing of this “economic dwarf” (because its GDP was only equivalent to that of Spain) was not in doubt. They lost face a second time.

The result is galloping inflation that creates a feeling of anxiety never seen before in the population (see graph below).

The facts show us that a cheap and abundant resource (gas) can bring the greatest economic powers to their knees if it becomes artificially scarce. This is what will happen in 2023. European governments have prepared short-term measures (subsidies, energy savings) to get us through the winter of 2022. But in 2023, it will be over.

To open a parenthesis that I will close right away, there are other economic dwarfs whose monopolies could have even more destructive consequences if they stop supplying their precious resources. A critical resource in an undemocratic country is a highly explosive cocktail.

Inflation will continue, and the ECB can do nothing. This inflation is “imported,” and printing money to curb the coming recession is not an option. It would only reinforce inflation. Unlike in the 1970s, the central bank has no room to maneuver, and 2023 will be the occasion for naive Europeans to realize this.

Rates will remain low in Europe, making the Euro lose value against other currencies. The purchasing power of Europeans abroad will be massively eroded. The feeling of exasperation, of boiling over even, can only increase. A feeling of anxiety is growing at the same rate as purchasing power is decreasing. Fear is a bad advisor, and we will see later what the consequences will be.

Unlike in the 1970s, the central bank has no room to maneuver, and 2023 will be the occasion for naive Europeans to realize this.

The world is protesting against the widespread impoverishment caused by this forced transition. Faced with exploding bills and dwindling purchasing power, Europeans will make their anger heard. In the Netherlands and the United Kingdom, these demonstrations of exasperation are already evident. Further afield, violent protests have erupted in Lahore over soaring electricity prices and in Argentina over soaring inflation.

In continental Europe and the United States, discontent is still low-key. But on social networks, there are many calls for help (see, for example, the now famous case of the Italian company ICAB published on social networks below). From 2022 onwards, however, demonstrations on a scale never seen before will be held in the richest countries. They will lead to riots in 2023. Even the police of the very wise Switzerland are preparing for this. 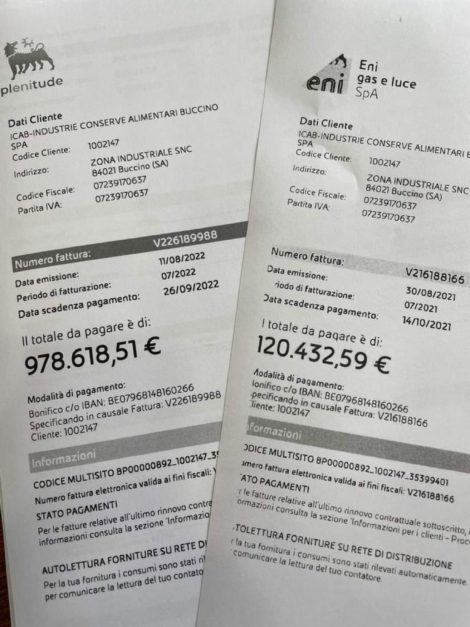 A photo posted by Industrie Conserve Alimentari Buccino (Italy) on social networks shows the increase in their energy bill in 1 year.

Because even though the crisis started with gas, it will soon be accentuated by an explosion in diesel prices. Its price has been artificially contained by subsidies and premiums (France, Belgium, etc.) and by the use of strategic reserves in the United States. These reserves are now dangerously depleted. 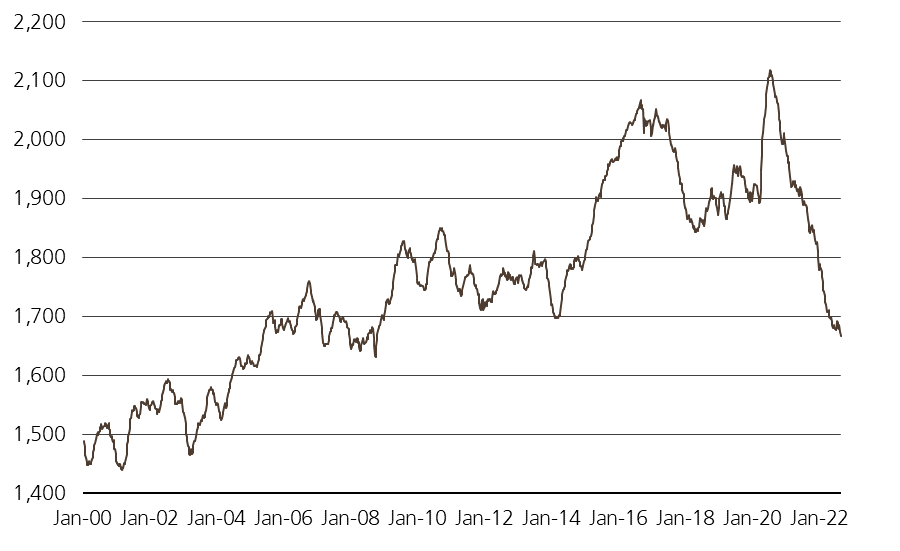 Status of strategic petroleum reserves in the United States as of August 2022.

The reserves of the more easily refined sour crude oil are the ones that have been tapped, as shown in the graphic of JavierBlas published on his Twitter account. By October 2022, these strategic reserves will be depleted. 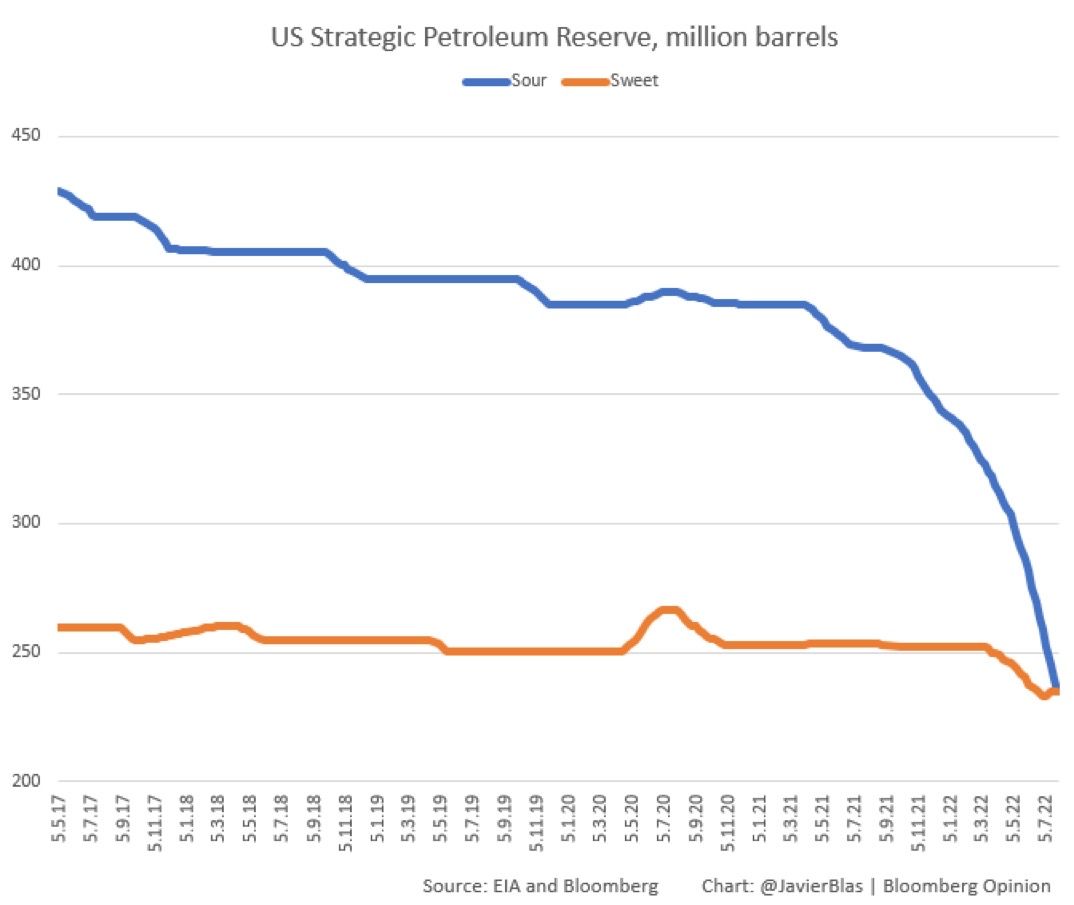 The status of strategic oil reserves in the US by type of oil (August 2022). Published by @JavierBlas.

A global transition from gas to oil (diesel) is taking place. The Kwh produced from a diesel generator is indeed 3 times cheaper at the end of August 2022 than the Kwh of electricity from the conventional grid. Saudi Arabia is already consuming more of its oil for its use (yellow curve on the graph below). Oil will become scarcer, and Europe has shot itself in the foot by cutting off Russian oil. Venezuela has also decided to stop oil exports to Europe. As a result, prices (especially diesel) will reach an unprecedented high this winter. 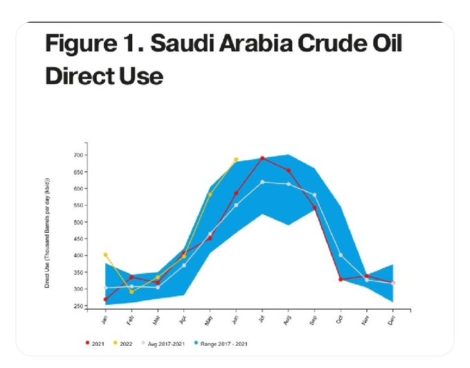 This graph, published by Atefeh Ebadian on his LinkedIn account, shows the evolution of Saudi Arabia’s self-consumption of its crude. Self-consumption is much higher in 2022 than in previous years, a sign of use for power generation.

The “yellow vests” movement in France in 2019 will seem like a walk in the park compared to what awaits continental Europe in 2023. I avoid discussing the United Kingdom, which has the added burden of Brexit and will be united in name only.

No political decision will be able to alleviate the European situation. Changing the principle of energy pricing in the European Union will not be able to absorb the total shock.
Moreover, as inflation is imported, the ECB has no leverage to mitigate it.
The summer period, synonymous with political vacations, has added to the general discontent. In Belgium, for example, the population openly criticizes a government absent from the scene for the entire month of August. The episode of Emmanuel Macron on his jet ski was another symbolic episode that widened the gap between the population and its leaders.

European citizens, faced with this gap of incomprehension, will see politicians as an illegitimate caste. 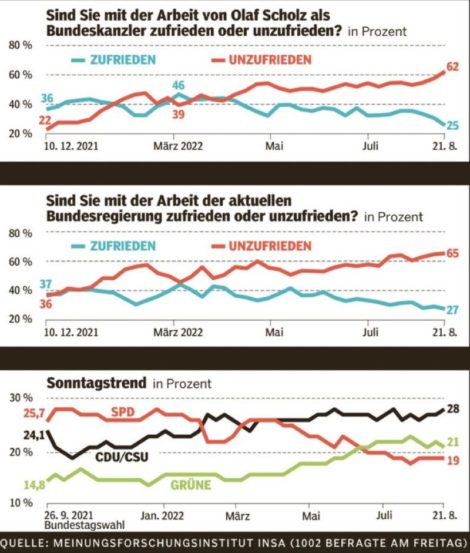 To complete the picture, a wave of pan-European indignation is already being felt against the environmental parties, whose stubbornness about stopping nuclear power has become untenable. In Belgium, the Minister of Energy, Tinne Van der Straeten, a champion of anti-nuclear power, is at the center of a conflict of interest that is hard to be believed. A lawyer, the firm she worked for before becoming minister, defended Gazprom. In France, Sandrine Rousseau, the ecologist leader and member of NUPES, is so mocked on social networks that her parody account on Twitter has more followers than her.

The Great Resignation will give way to the Great Abandonment.

The fourth act will be played out in public services. This will result in the disorganization of public services. Exasperation and demonstrations will be followed by despair. Those who work will lose the little motivation they have left in the face of daily difficulties.

The seeds of disorganization are already visible. Since 2021, we have been dragging the post-covid dysfunctions of the supply chain. In addition, there are massive dysfunctions due to a lack of personnel:

To remedy the situation, the emergency’s rules of quality are superseded. Already teachers are being recruited who do not have all the qualifications. At the hospital, tested by 2 years of Covid, the bodies are worn out, and the finances are drained. Chaos is looming.

With diesel prices at unprecedented levels, workers will soon be faced with an insoluble equation: stop working and not consume gasoline or work at a loss. The public services will, therefore, gradually die out. The Great Resignation will give way to the Great Abandonment.

The working classes will be particularly affected by the loss of jobs and will be the engine of the revolution. Energy-intensive industries (foundries, fertilizers, glass factories) will no longer be profitable and have to close. This has already begun (examples in Belgium and Germany).

The revolution will begin when all the factories have closed, when the working class is unemployed, strangled by unpayable bills, and without the support of the over-indebted welfare state.

To anticipate the focus of this revolution, we need to understand where the European “powder kegs” are. To do this, we must look at the concentrations of factories whose fate is threatened. 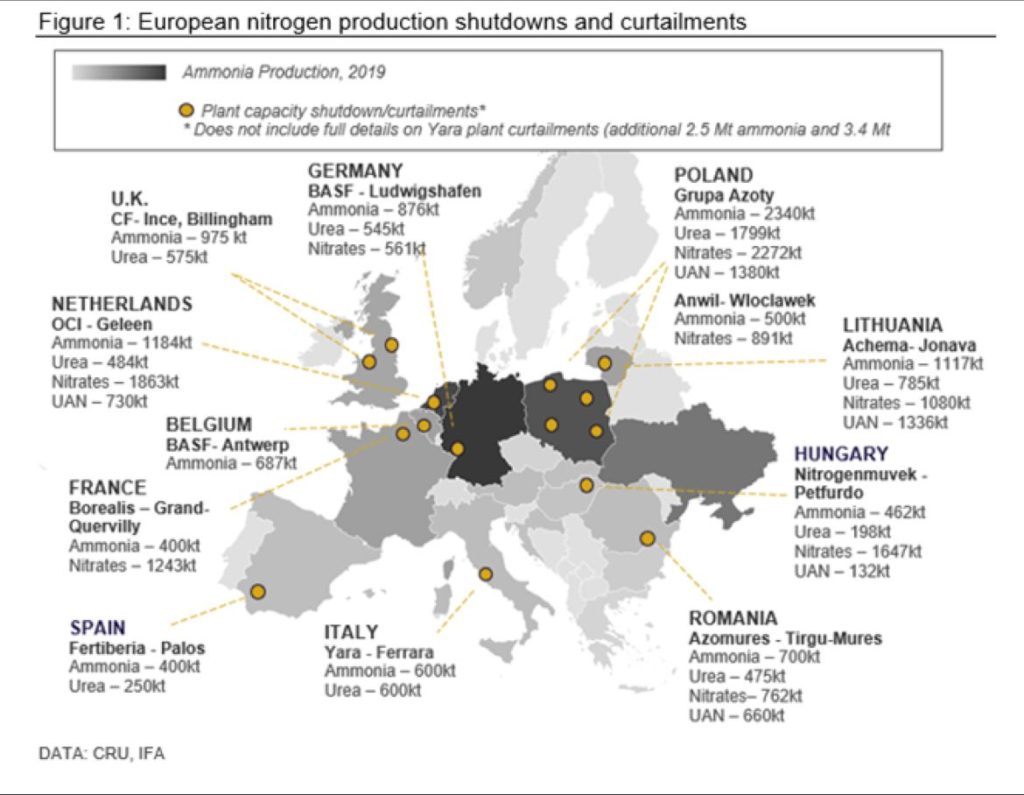 CRU Group published a map of ammonia plant shutdowns in Europe on 8/25/22.

Here are the steel production factories in Europe. Compiled by Eurofer, this map allows us to locate the risks. 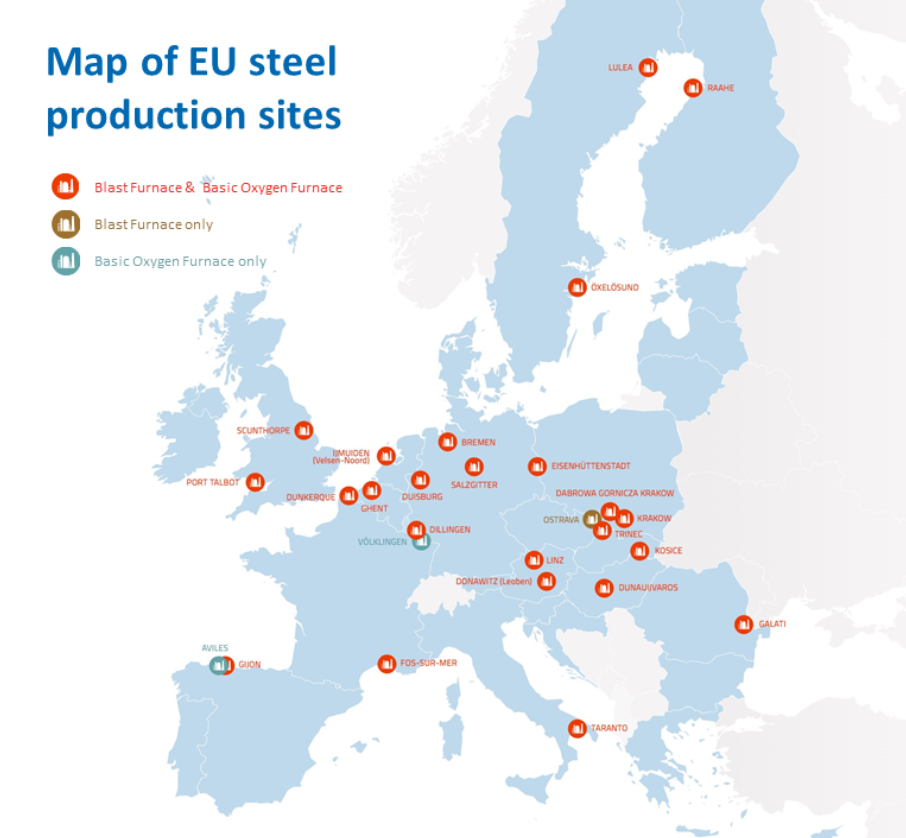 Map of steel production factories in Europe compiled by Eurofer.

Germany and Poland are the two regions most at risk. It is reasonable to think that the revolution will start in the east, in Poland, where there are four production plants and 1.2 million Ukrainian refugees. Poland has also shown a clear tendency to break away from European rules. This cocktail is explosive.

The United Kingdom is also in the eye of the storm. With Brexit and the uncontrolled increase in inflation (18% expected in January), tensions will only increase. The Scots are in ambush with their referendum to put the final nail in the English coffin.

Faced with such an uproar, the governments in place will try to react. But in the face of the emergency, paralyzed by fear and incomprehension, they will multiply their mistakes.

The democratic governments will then fall one after the other, following the example of Italy, which is about to fall into the hands of the extreme right.

An autocratic black wave will then sweep across Europe. Already accustomed to anti-European rhetoric (Marine Le Pen in France, Giorgia Meloni in Italy, Viktor Orban in Hungary), it will take advantage of the growing anti-European sentiment to take power.

Nothing will then be able to stop the dislocation of Europe. The “old Europe” will die.

Deprived of allies, the United States will see its aura diminish. The centers of power will shift to the East. China and India will lead in this new version of the world. Europe, in ruins, will take a decade to emerge from the ashes, the time for the autocrats to demonstrate their incompetence. By then, it will be 2035.

The Euro will have become a secondary currency, like the dollar. The ruble and the yuan will be the new standards. The large-scale purchase of physical gold by the Russian and Chinese central banks lends credence to the thesis that they are preparing for this paradigm shift.