How do users behave when they can control the Spotify interface

At the RecSys 2018 conference an interesting piece of research was presented by Yucheng Jin (University of Leuven), Nava Tintarev (TU Delft), Katrien Verbert (KU Leuven). Their paper, entitled “Effects of Personal Characteristics on the Music Recommender with Different Controllability” explores the effects of an interface provided to Spotify users to better control and adjust their musical recommendations.

Two levels of control are provided to the user. The first one (“a” in the picture below) allows the user to adapt top artists, top tracks and top genres. The second one (“b” in th picture below) gives the user the possibility to adjust the weights (on a scale from 1 to 100) of each feature (artists, tracks, genres).
The result (the algorithmic recommendations) appear in the part “c” of the interface below. 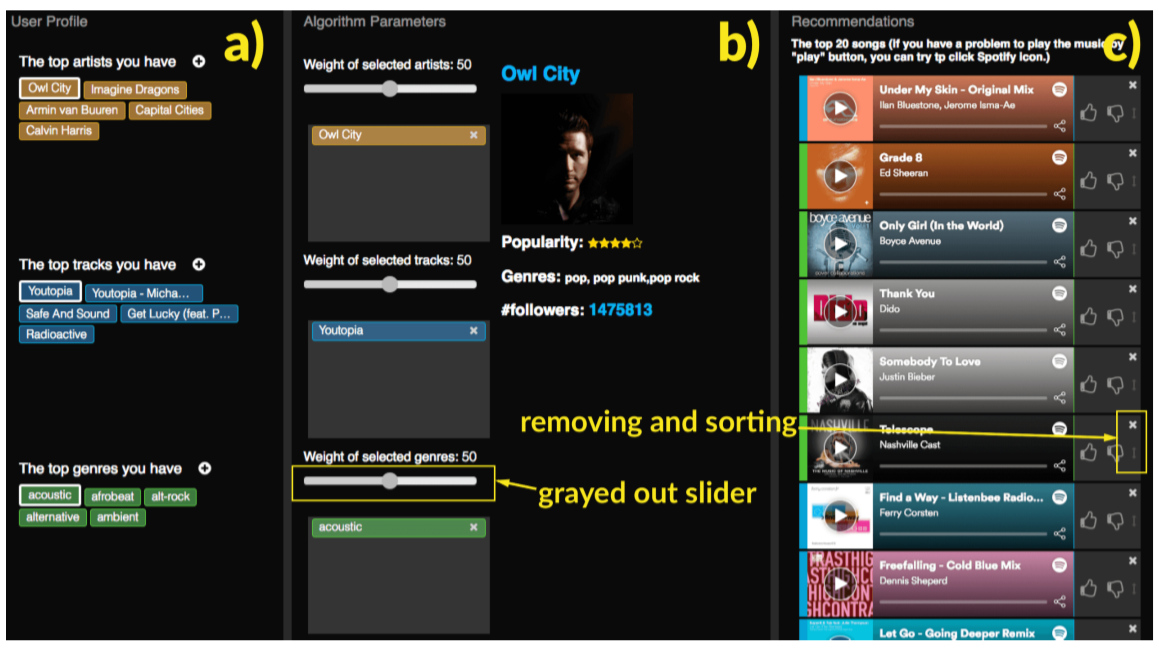 How does controlability affect user response

Thoughts on giving control back to the user

When we limit ourselves to the one-way interactions, the conclusions seems logical. More control increases cognitive load and decreases acceptance (who would like to use a system more if he has to use more cognition to use it? Interfaces are designed to simplify our lives, not to complicate them, aren’t they?). The results of the two-way interactions seem there quite counterintuitive to me.

What user really really want is simplicity and peace of mind

I tend to believe that giving extensive possibilities to the user to control the system may end up in some kind of disappointing experience for the firm if the wrong KPI’s are monitored. Vautrot et al. (2018) have shown for instance that users value the controlability of the system but don’t use the controls. Yet they use controlability as a signal to put trust in the system. This is an important lesson. Trust will be enhanced but usage will remain low.
In the end we should always remember that the great majority of users is not made of experts. Normal people have little time and are not necessarily willing to navigate through a more complex interface. What people want is simplicity and peace of mind. This is what system designers should keep in mind at all time