At this year’s EMAC conference in Hamburg, I had been invited by Prof. Bernd Skiera and Prof. Klaus Miller (both affiliated with the University of Frankfort, Germany) to give a talk about online advertising research in the era of privacy.
In today’s article I’m making my slides available and am developing my thoughts in the hope that they will help academics find new interesting paths for their future studies.

Online advertising: a lot has been going on since 1994

Th first online ad appeared in October 1994 in an attempt to nudge people to click on it. And it seems it worked (probably because it was so new and never seen before the click-through-rate was high). Since then, online advertising has evolved from some-for-all ad to targeted advertising. Data is collected everywhere on everybody, reconciled and shared among gigantic Data Management Platforms (DMP) that count sometimes hundreds of millions of individuals (Adobe claims that its DMP contains more than one billion users).

Banners, the content of which is nowadays targeted to user profile on the basis of data shared through DMP, remains the main form of advertising today. It seems to me that the availability of data also fuels the major part of academic research in that area (we have seen many such researches at EMAC 2019). The question remains therefore whether the availability of data should drive scientific research or whether researchers should focus on what will drive future behaviors.

I outlined 5 avenues for further research on online advertising.

Increased user satisfaction is often cited by practitioners to justify the introduction of targeted advertising. But what do we really know about it? Not much I’m afraid and in my opinion it’s a very promising research avenues with huge theoretical and managerial implications. Studies exist that show that consumers would tend to prefer targeted advertising vs. regular untargeted advertising. In their excellent work Zhu and Hang (2016) for instance showed that perceived relevance is indeed correlated with continuous use intention. In other words personalizing the ads does indeed seem to increase “satisfaction”. However the reality is more complex and nuances than just that (and practitioners overlook those nuances). The first nuance is that continuous use intentions are somewhat counterbalanced by privacy invasion perception (see results below). Second the results were obtained in a somewhat “artificial” setting and despite their interest should be confirmed in real conditions. 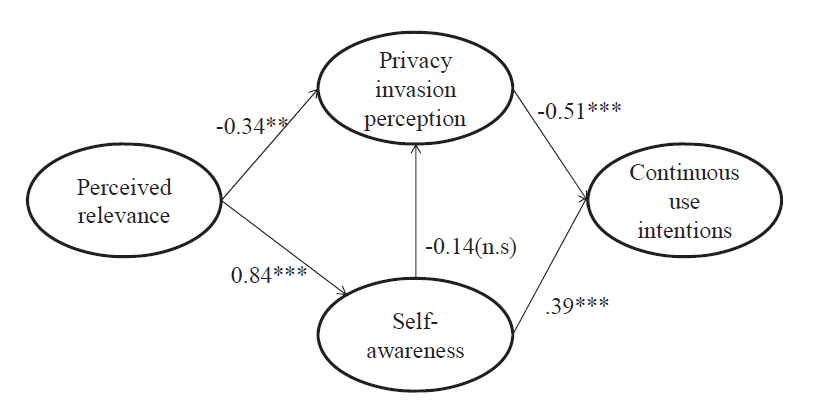 In line with the previous aspect (user satisfaction), better targeting can only be reached with more data. There is therefore a kind of trade-off between privacy and targeting “precision”. This trade-off needs to be investigated and the model proposed by Zhou and Hang (2016) tested in other conditions. I light of the Belgian Data Alliance which will share data on millions of users in Belgium for the sake of targeted advertising, this makes all the more sense.

Which KPI’s for video advertising

The future of advertising is in the videos. However most academic research is still focused on “static” advertising (banners) and the main KPI used is CTR (Click-Through-Rate). Academic research needs to move its focus to video advertising and to come up with new KPI’s to infer users’ intention and satisfaction.

In line with the previous section, defining new video-related KPI’s will necessarily lead to measuring the efficiency of targeted video advertising. I called for measuring this efficiency “in context”, i.e. taking into account the very video to which the ad was “attached” (be it before, after or during the video). Some types of contents (like series) make people stick and ads are not skipped whereas others can lead to churn. So it’s crucial to understand the context before drawing conclusions.