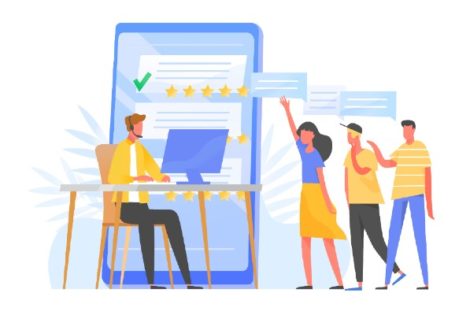 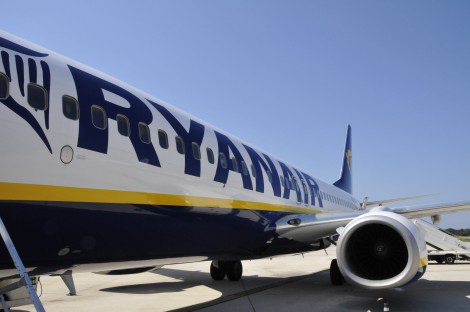 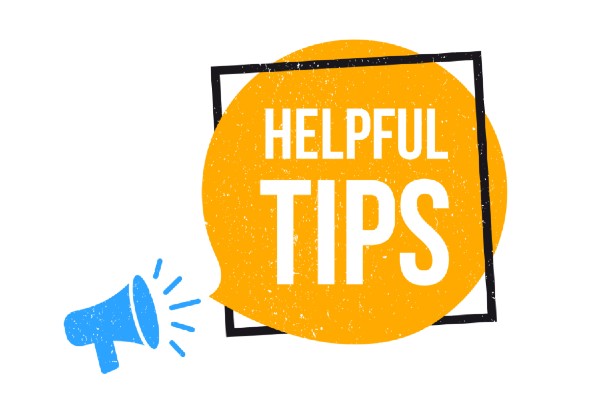 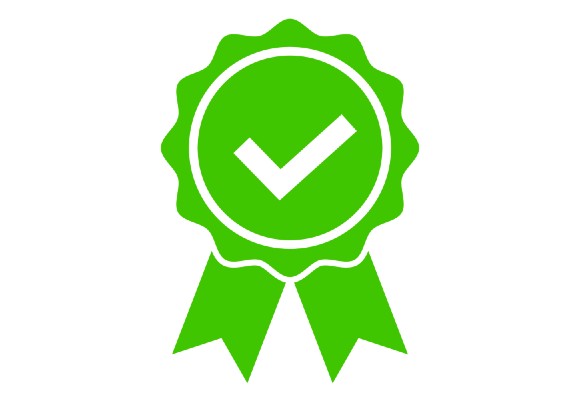 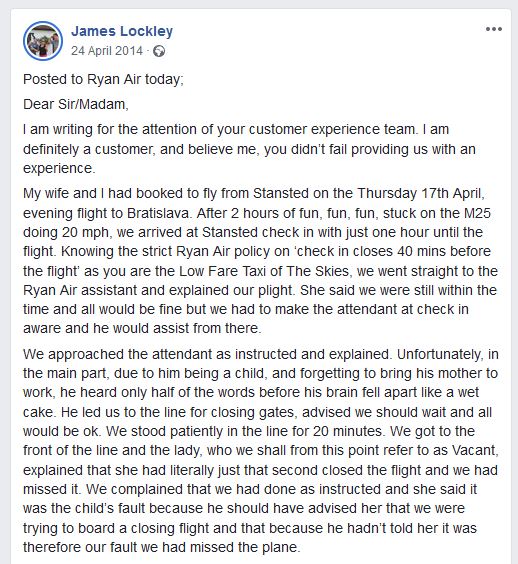 
Dear Sir/Madam,I am writing for the attention of your customer experience team. I am definitely a customer, and believe me, you didn’t fail providing us with an experience.

My wife and I had booked to fly from Stansted on the Thursday 17th April, evening flight to Bratislava. After 2 hours of fun, fun, fun, stuck on the M25 doing 20 mph, we arrived at Stansted check in with just one hour until the flight. Knowing the strict Ryan Air policy on ‘check in closes 40 mins before the flight’ as you are the Low Fare Taxi of The Skies, we went straight to the Ryan Air assistant and explained our plight. She said we were still within the time and all would be fine but we had to make the attendant at check in aware and he would assist from there.

We approached the attendant as instructed and explained. Unfortunately, in the main part, due to him being a child, and forgetting to bring his mother to work, he heard only half of the words before his brain fell apart like a wet cake. He led us to the line for closing gates, advised we should wait and all would be ok. We stood patiently in the line for 20 minutes. We got to the front of the line and the lady, who we shall from this point refer to as Vacant, explained that she had literally just that second closed the flight and we had missed it. We complained that we had done as instructed and she said it was the child’s fault because he should have advised her that we were trying to board a closing flight and that because he hadn’t told her it was therefore our fault we had missed the plane.

Confused by this process of blame apportioning, another check in clerk, who we shall refer to as Not That Bright, tried to blame us for not responding to the last call for the flight as we should have made ourselves known. I argued that the last call had not been made. Not That Bright then questioned Vacant on whether she had done a final call. Vacant did what she does best and looked, well,…… After establishing that the child had not informed Vacant we were here, and Vacant had forgotten to do a last call and that all of this was irreversible, and my fault, Not That Bright and Vacant conferred to agree this was not a problem they wished to deal with and told us to get in a very, very long line of very, very unhappy people at the quite wrongly titled ‘Customer Services Counter’ as it was in fact a Customer Shouting Desk. We complained and requested the attention of a manager.

Out came Colin, a man so angry all his hair had literally fallen out. He was so aggressive I can only assume he had accidentally inserted something sharp into somewhere private and been unable to remove it before he came to work. He was definitely a middle Gimp. I know this as Vacant and Not That Bright were clearly quite scared of him, and he can’t have been a Big Cheese as he was talking directly to customers and we all know from the papers that no-one in Big Cheese management at Ryan Air has ever seen, let alone spoken to an actual customer.

Middle Gimp had clearly listen hard at Ryan Air Middle Gimp school as he managed to take two perfectly calm and sane adults and in a matter of seconds reduce them to angry people considering violence.

‘Why is this our fault, and why should we miss the flight because Ryan Air staff have admitted they made errors?.

‘Do you acknowledge we have just cause for complaint as we tried to do the right thing and the only reason we are not on the plane is because of communication failures with Ryan Air Staff?’

‘What colour are my trousers?’

‘Do you think economic sanctions on Russia will diffuse the escalating situation in Ukraine?’

‘My tinkle is hurting, could you take a look if I promise not to tell anyone?’

Middle Gimp then conferred with Vacant and Not That Bright, and agreed that this was all our fault as we should have noticed that Child had made an error and we should have called the flight ourselves to assist Vacant in doing her job because she was clearly busy being, well,…… Middle Gimp then insisted we go to customer the Customer Shouting Desk, as he was definitely not going to do anything else. This was handy as the queue was very long so that by the time we would reach the front the plane would be half way to Bratislava and the problem would be solved.

We waited patiently in line as customer after customer stood at the desk to hear the same song;

We got to the Customer Shouting Desk and explained our plight to the lady there (who was actually very nice and clearly should not be working for Ryan Air as a result). She apologised but explained that Middle Gimp had finished being angry for the day and had returned to his padded cage, and there were no other Middle Gimps around. We would have to book in to the flight for the next day and we would have to pay £110 each to change the ticket. When she tried to re-book the flight she said that the flight we had tried to get was actually delayed by 1 hour and still at the airport and that what we should do is run to the gate with all our luggage, she would call through and they would check our bags into the hold at the gate. We ran as fast as we could, which is not very fast because I am fat, to security to do as instructed. Security advised us that because our flight should have left, even though it hadn’t, the ticket machine would not open the barrier for us and we would need to return to the Customer Shouting Desk.

We waited patiently in the very long queue yet again for about 40 minutes to discover the nice lady had also gone home now so we had to explain the whole thing again to a new lady that looked like all the joy had been removed from her life at birth. She recited the Ryan Air customer services song with a sterling level of apathy and dreariness, I am surprised she could muster the will just to breathe and stay alive.

She recited it with perfection, Middle Gimps across the world would have been in awe and the effectiveness of the techniques taught in Middle Gimp School. Seeing no other option but to hand over all our cash and come back the next morning we happily paid and got new flights.

So, our customer experience was insightful and liberating. From the incompetent Child with a brain so full of girls and Vauxhall Corsa modifications he couldn’t actually listen or speak, through Vacant and Not That Bright who decided on reflection that anything they did wrong was our fault for not pointing it out to them, right through Middle Gimp who made a Tasmanian Devil look calm and Zen like, and the sad one, oh so sad, having every last drop of life sucked out of her by her chosen career at the Ryan Air Customer Shouting Desk. I very nearly jumped over the desk just to give her a cuddle and tell her everything would be alright if she could just muster the will to leave the Ryan Air Customer Shouting Desk and find a more fulfilling job, like starting the very first Israeli pork pie factory, or being a parking attendant in Tower Hamlets, or in fact just resigning herself to a slow and uncomfortable death would have been indistinguishable from the current position and would require much less effort.

The net result of this ‘experience’ was;

1 x significant breach of Tort Law (2008 as quoted by Lord Atkin) by Ryan Air, Google it, it’s a cracking read. I will leave you to decide the monetary value of this.

1 x very angry and upset wife, in particular with Middle Gimp for being so unbelievably rude.

1 x Missed wedding reception for our Slovakian family (sorry, forgot to mention this nugget earlier) who all turned up from all over the country to see us for an event we were forced to miss, because Child and Vacant are clueless at best and Middle Gimp has anger management issues.

So, thank you Ryan Air for a comfortable and enjoyable experience. I have watched a program called the news so I fully expect this to land on the desk of the customer services team underneath the empty bottles and sandwich wrappers that you also file there. You treated us badly, you cost us money and made us miss our wedding reception through a display of incompetence I have not seen since Greece was allowed to have money and a cheque book.

I sincerely doubt you will do anything about this, compensate us, apologise, or even respond according to the news, so I have sent this recorded and sign for delivery to absolutely confirm my opinion of Ryan Air and that it is not just ‘lost in the post’

P.S. Maybe Middle Gimp in particular, but Child, Not That Bright, and Vacant should purchase one of your reasonably priced tickets and go to Slovakia (assuming they were actually allowed on the plane). The Ryan Air employees there are smart, clever, bilingual, helpful, and polite and they should in my opinion experience an example of how they should do their jobs. The Slovak staff could explain it to them, but they wouldn’t be able to understand it for them, so it may be a waste of time after all.